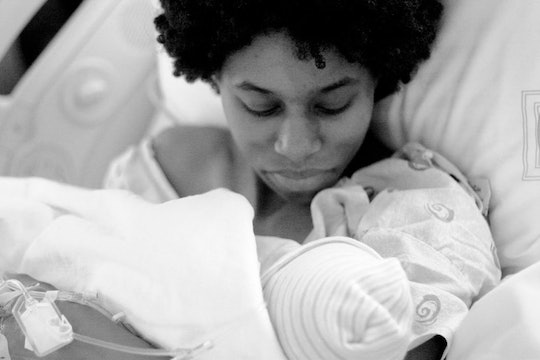 My first birth was an emergency c-section. At least, that's what my doctors and nurses called it. I made the choice to have a c-section, no one else made it for me, and I'm really glad I chose a c-section delivery. After being in labor for over 30 hours, I was too tired, and I didn't want to wait another 12 hours to see how I progressed. So I chose a c-section. The second time I gave birth, I scheduled a c-section. Despite everyone telling me to have a VBAC, I didn't listen and went ahead and chose a date with my OB-GYN. There was something liberating about not having to wait on the baby to decide when they'd be born and being able to have a day set aside to give birth, like a goal we were working toward. Looking back, I'm so glad I scheduled my c-section.

Very much like my first pregnancy, my second one was pretty easy too. Despite the fact that I already had a 6-month-old daughter at home and spent the next 40-plus weeks trying to keep up with my baby, my second pregnancy passed by in a bit of a blur. In all honesty, it went by much faster than the first. I remember I spent my days counting down the minutes until I went into labor with my first, and the second time around, I was counting down the hours until each nap time and then bedtime. I wasn't even thinking about the clock ticking down on my delivery.

When friends found out that I'd had a c-section the first time, they told me that I "didn't trust my body enough to labor naturally," that my doctors had "pressured me," and that I obviously "wasn't educated enough in birth." I even had a friend tell me that my body was "supposed to be able to give birth on its own," and that if I'd just "been patient," it would have taken over and did the work it needed. Except my body wasn't able to do things on its own, and my baby's life was saved because I had the option to have a c-section delivery. I'd never forgotten this, and it definitely inspired my decision to have a scheduled c-section.

Because we lived in a new town five hours from where my parents lived and a full state away from where my in-laws lived, I was worried about who would watch my daughter when I went into labor with our son. But scheduling my c-section put me at ease. My mom was able to come up a few days before I was due to go in for my c-section so she could get adjusted to the schedule we had my daughter on, and so my daughter would get accustomed to having her grandmother help her with things. When my OB-GYN said he wasn't willing to do a VBAC, I was honestly relieved. Having an idea of what was going to take place with the birth of my second child comforted me. I know that birth, no matter how its planned, never goes according to plan. So I was happy to have at least an idea of what was going to happen. After struggling with the first birth, and losing a baby almost 5 months after that, I held on to this idea that my son was going to be born safely.

But when I went into early labor three weeks before my due date, I was terrified I'd be forced into a VBAC. I worried I wouldn't make it to the hospital in time to be prepped for surgery and that I'd end up with no choice but to deliver my son vaginally. I couldn't do it before, so I feared what would happen if I tried this time around. I worried about all that could go wrong if I had to deliver before I was ready: Who would watch my daughter? Would my baby be OK? What if I didn't want to deliver vaginally? Thankfully, I was released from the hospital and told to rest. But the next morning I woke up to even more contractions. My baby was coming.

Even though I went into labor unexpected, I was still able to go ahead with my scheduled c-section. The only difference was that we were weeks ahead of schedule.

I called my mom, shouting at her to drive the five hours it was going to take her to get here as quickly as she could. I cleaned my house while my husband begging me to get in the car. I held my daughter for as long as possible. When we dropped her off at a friend's house, my doctor called wondering why I wasn't at the hospital yet. Part of me was so frustrated that my baby had decided to come a week early, upset that my plans were ruined. Having my surgery scheduled made me feel as if I had some sort of control of the situation. I wanted to control how and when my child arrived. But there was still a part of me that thought it was kind of amazing that despite planning out a c-section, and thinking I was organized, my child had plans of his own.

Surprisingly, even though I went into labor unexpected, I was still able to go ahead with my scheduled c-section. The only difference was that we were weeks ahead of schedule. My husband and I laughed as we ran into labor and delivery trying to meet my doctor on time. I thought that scheduling my c-section would make me feel some sort of control, some sense of peace, but it was honestly a good reminder that even if I do have nicely laid plans, that's not how life works.

When I was in labor with my daughter, I was eager for the time when my doctors told me to push, and it was a scary moment to have them tell me that she was stuck and wasn't going to be able to come out. So I had to make a choice to save her life. This time around, I wanted to do everything to avoid that. I wanted so badly to make sure that my son arrived safely. I don't doubt what my body can do, but I was so happy to have my birth date scheduled, and it was a goal I worked towards. Even though he came a few weeks early, he was still right on time.

More Like This
Does The FDA's Plan To Limit Lead In Baby Food Go Far Enough?
32 Zippy Girl Names That Start With “Z”
Mom Gives Birth To Record-Breaking 16-Pound Baby
41 Airy Aquarian Names Perfect For Your Little Water-Bearer
What Parents Are Talking About — Delivered Straight To Your Inbox