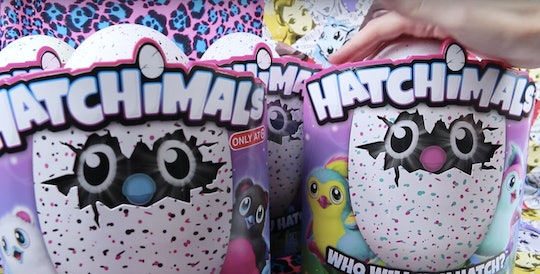 Actually, I'm Not Buying My Kid A Hatchimal This Year, & Here's Why

Remember Cabbage Patch Kids? Back in the early 1980s, our parents completely lost their minds trying to buy one of these ugly, misshapen dolls for Christmas for fear of disappointing us, their ungrateful offspring. It was an embarrassment. And did consumers learn from this embarrassment? Hell, no! Since then, riot-inducing Christmas toys, from Tickle Me Elmos to Furbys, have become an integral part of the American holiday tradition. And 2016 is shaping up to be no exception, thanks to this year’s hottest toy: Hatchimals.

For the uninitiated, Hatchimals are fuzzy, bird-type creatures with quirky species names like Owlicorn and Bearakeet. They've been sold out both in stores and online since before Thanksgiving. Each Hatchimal starts life inside an ostrich-sized egg, eventually pecking its way out — that is, as long as the egg is rubbed and moved correctly. The hatching process seems to be the biggest draw for kids, and even I must admit that a toy that physically breaks out of an egg is pretty damn cool, in theory.

While I won't begrudge a parent who wants to buy one for their kid, I've been doing a little research, and I don't think Hatchimals are for me. There is no way in hell I am getting a Hatchimal for my son, and I’m not remotely sorry about it for a few reasons.

First of all, the process of getting Hatchimals to actually hatch can be a lot of work. It requires small children to summon all the patience they have and hold the egg in a certain way, rub the egg just right, tilt it but not too much (because it gets dizzy), tap the egg, burp the egg, and make sure the egg doesn’t get upset. This is what happens when your Hatchimal gets upset:

After 10 to 40 minutes of this process, the official Hatchimals website claims, your Hatchimal will begin pecking through its shell. This time frame has the unique distinction of being both way too long – unless you have an incredibly patient, gentle kid who can play “perfectly” with an egg for 40 straight minutes – and too short. Because the hatching is kind of the best part. Once it’s out of the shell, a Hatchimal looks a little bit like a Barney stuffed animal mated with a Furby, only with a dead look in its glowing eyes:

But that’s only a problem if the thing, you know, hatches, which is not guaranteed. More than half of the Amazon reviews for this Penguala are one to two stars, featuring titles like: “Cute idea but the ones we ordered never hatched," “did not hatch”, and “’Hatchimals are supposed to hatch, right?”

According to one review, one Hatchimal needed surgical intervention: “We had to perform a C-Section. We did everything the directions said. And I could hear a gear noise going on inside it like it was TRYING to hatch, but it DIDN'T hatch," the author wrote.

To its credit, the company that makes Hatchimals, Spin Master, responds to most of these comments individually on the Amazon website, offering suggestions and further help under the name Spin Master Customer Care. (Romper reached out to Spin Master about Hatchimals' customer complaints, but did not hear back from the company at press time.) Still, while one would think that most parents would be loath to purchase a toy with the word “hatch” in it if it doesn’t hatch, far be it for logic to come into play during the holiday shopping season.

The second reason why Hatchimals are on the “absolutely not” list for me this year is because there appears to be a booming industry of Hatchimal resellers with, shall we say, less than sterling ethics. Because Hatchimals are largely sold out in stores, the market is now oozing with those particularly vile Christmas trolls: prices are soaring on eBay and Amazon, with many third-party vendors selling the toys at three or four times the original price. They’re so in demand that shoppers are literally commenting on the bad Amazon reviews with offers to buy malfunctioning Hatchimals.

Some people are making a killing buying Hatchimals and then reselling them at exorbitant prices. Brothers Mike and Stan Zappa, for instance, two regular dudes who eerily predicted Hatchimals’ popularity, stockpiled $5,000 worth of Hatchimals in October. They're now laughing all the way to the bank, earning between $100 and $250 for each one.

Listen, I'm a parent. I know there's a lot of pressure to live up to our kids' expectations during the holiday season, and that we all hate the thought of disappointing our kids on Christmas or Hanukah morning[s]. But let me tell you one thing: my kid has enough toys. I’m looking around my house right now. It’s f*cking filled with toys. He doesn't need that many more. Enough is enough.

If your kid is really into things that hatch from eggs, how about spending a quarter of that money on an Audubon membership and visiting a wildlife sanctuary to see some birds IRL?

Sure, it might be disappointing for some kids to ask for a Hatchimal for the holidays and not find one expectantly gazing up at them. But I think some disappointment might be good for kids. It could be a teachable moment! We could sit them down and say, “Look, kid, I love you, but that Hatchimal toy you want isn’t awesome and even if it were, I can’t get my hands on one. Neither can Santa. Now, let’s pick out another toy that you might like instead.” If they pitch a fit, gift them some underwear and call it a day.

Or here’s a thought: If your kid is really into things that hatch from eggs, how about spending a quarter of that money on an Audubon membership and visiting a wildlife sanctuary to see some birds IRL? Or buying a kid-friendly birding book, such as the award-winning Look Up! Bird-Watching In Your Own Backyard, a book I just found on Amazon? Or one of those weird, clear bird houses you can stick on your window to spy on naked baby house wrens? Something that offers a real hatching experience, instead of a toy that will eventually get tossed into the chest and forgotten about come New Year’s?

Ultimately, I believe the Hatchimal craze, just like any other holiday toy craze, is only about one thing: fear. Fear of being a bad parent. Fear of making our kids sad. Well, I’m not going to let panic over my kid’s potential disappointment hold me hostage. Not getting a Hatchimal might disappoint my kid for one day, but having a parent who is driven insane by the quest to buy an egg with a toy inside? That’ll disappoint him for life.