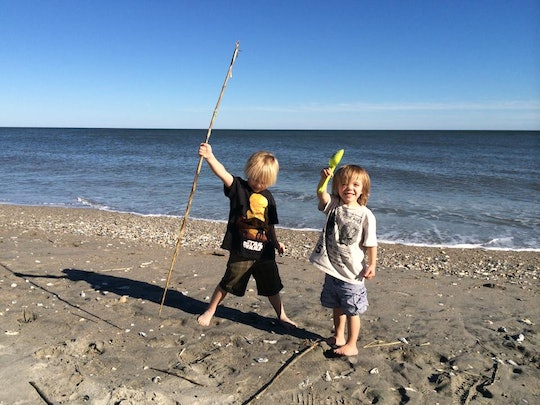 Actually, Potty Training My Sons Was Nothing Like I Expected

I had seen a friend with kids potty train her daughter. It went like this: She took off her pants. She gave her child rewards for peeing and pooping in the potty. They stayed home for three days and did this, and lo and behold, Xanthippe was potty trained. She was around 2 years old at the time. So that’s what I expected from my boys. A few days of naked butt, a few days of accidents on the carpet, and then victory. Unsurprisingly, I was wrong. So wrong. Potty training my sons was nothing like I thought it'd be

He was 3 years old when he earned that Yoda, but went back to pooping in his pants as soon as he’d gotten it.

So we took off the underwear at home. He started hitting the potty with pee. But poop… poop was another story entirely. He’d hold it until he got on underwear or a diaper, then let ‘er rip. So we were scraping poop out of Star Wars undies. We tried using potty rewards: if he could poop in the potty, he'd get a castle piece, a dragon, or a marshmallow. Then, if he could poop on the potty every day for five days, he'd get the stuffed Yoda he’d been coveting. He was 3 years old when he earned that Yoda, but went back to pooping in his pants as soon as he’d gotten it.

Blaise wasn’t potty trained until we gave up and left him in undies on a long trip to the beach. He suddenly wailed, “I have to poooooooop!” so we pulled off, and lo and behold, he pooped in the frog potty on the side of the road. He had one more accident after that, as soon as we arrived at the beach house, and then regularly pooped in the potty. Maybe he needed a change of scenery. He was 3-and-half years old by the time he was trained, including at night.

My second son, August, was potty trained at about the same age, if not maybe a little bit younger. We didn’t bother to bribe him. We didn’t bother to pester him. We just took his diaper off and let him know where the frog potty was. It took him a while to learn how to poop in it, but it seems to take all my kids a long time to learn to poop. We put him in diapers whenever we went anywhere, which probably prolonged the process; however, we didn’t want to deal with poopy underwear outside of the house, and no way was I staying cooped up in the house for a week while he figured out how to poop. That did not fit into our lifestyle.

The downside to potty training Sunny is that it introduced him to the concept of being naked all the time.

He trained around 3 years old, nights included — as long as you reminded him to pee right before bed and as soon as he woke up.

My youngest isn’t potty trained yet, and he's 2-and-half years old. About six months ago, he started showing interest in peeing in the potty, so we dragged out the frog potty again, took his diaper off, and let him try. We goaded him a lot — “Do you have to go to the potty?” — and soon he was pretty regularly using the potty, though as recently as a few weeks ago, he peed on the couch. When he gets distracted, all thoughts of the potty go out the window. The downside to potty training Sunny is that it introduced him to the concept of being naked all the time. He’s now a dedicated nudist. We have to allow it, because he’s trying to use the potty and won’t pull his underwear down. And I’m sick of peeling off wet Ninja Turtle undies, so naked it is.

He’s pooped on the potty once or twice, but mostly holds it until he’s in a diaper or underwear. Early on, he did poop on the floor a few times. Since we also have a puppy who's full on potty-training too, poop on the floor bothered me a lot less than it would a normal person.

Our next step with Sunny is to get him to pull down his underwear when he needs to pee. Then we can add pants, and finally, hopefully, he’ll start pooping regularly in the potty, and I can store all my cloth diapers and the changing table away until our next baby. I’m very much looking forward to that. He stays dry at night, so the day can’t be far away.

Potty training isn’t what I expected. Maybe if we were less laissez-faire about it, the kids would train sooner. Maybe if we pushed them to poop and offered more rewards, they’d come through. But that’s not our parenting style. That’s not how we treat our kids. We figure that eventually, they’ll learn to use the potty.

And so far, everybody has.