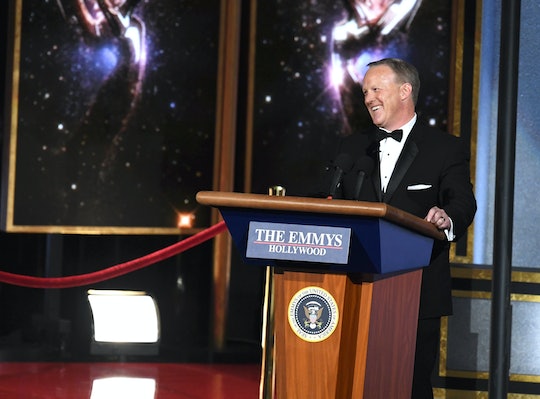 So it's 2017, disgraced former reality star Donald Trump is the president, and the lines between politics and entertainment have been irreparably blurred. I get that, to be sure, and humor has always been a way to get through the dumpster fire that is a crumbling political climate, but there's a line that we, the people, should never cross. That's why I'm sorry to tell Stephen Colbert that, actually, Sean Spicer's Emmy appearance was not cool, funny, or edgy. It just served to normalize this weird, gray, poli-tainment soup we're all currently drowning in. The joke was that Trump seems to view the both Emmy Awards and the presidency as nothing more than popularity contests for stars to conquer. But can we not double down on that nonsense, please?

After rolling a clip of Trump complaining that he should have received an Emmy for Celebrity Apprentice during an actual presidential debate last year, Colbert joked that Trump didn't get one because "Emmys go to the winner of the popular vote." That is some very good synergy between Colbert's brand of political taunting and the actual awards show he was hosting! Yes! Great job! A wonderful point, and now we can move on to something about climate change, yes? Reproductive rights, maybe? Immigration, perhaps? No. Colbert, unfortunately, took the joke way farther than it ever should have gone.

Of course, what really matters to Donald Trump is ratings. You gotta have the big numbers. And I certainly hope we achieve that tonight. Unfortunately, at this point, we have no way of knowing how big our audience is. I mean, is there anyone who could say how big the audience is? Sean, do you know?

And in he strode, the former White House Press Secretary himself, complete with a rolling podium (although notably, not a motorized version like his doppelgänger rode on Saturday Night Live last season). "This will be the largest audience to witness an Emmys, period!" Spicer proclaimed, paraphrasing his patently false claim about the 2017 presidential inauguration while simultaneously smiling the smile voters had come to recognize for months on end. "Both in person, and around the world."

Colbert replied (so, so unnecessarily), "Wow, that really soothes my fragile ego. I can really understand why you'd want one of these guys around. Melissa McCarthy, everybody! Give it up!" Yes, we get the joke. We really do. The president reportedly surrounds himself with yes-men and even receives a twice-daily "propaganda document" full of pro-Trump articles and flattering photos. But this information shouldn't be met with a wink and a giggle. He's no longer just some kooky New York real estate developer and status-seeker, he's the leader of the free world. The joke stopped being funny a long time ago, and at this point, it's straight-up alarming.

To be clear, I do have a sense of humor (and I think most Americans do, honestly), and I actually make jokes about Trump and his cabinet all the time. But for me, and so many other Emmys viewers, this one was a bridge too far.

I'm not the only one who finds "Hahaha, I lied on behalf of the president!" a disturbing joke, as made obvious by Twitter:

She works at Buzzfeed, home of memes and Harry Potter quizzes and general fun and funniness. And she's not loving this joke.

He didn't care for it, either. It's a scientific fact that all fans of The Office have impeccable senses of humor, and look, he even made a joke about the joke!

Here is a comedian/comedy writer, a professional who has built a career out of figuring out what's funny and what isn't. Also Team Nope.

Perhaps this was supposed to be Spicer's apology to America, his moment to show us that he was actually in on the joke the whole time, that he knew the falsehoods he repeated, allegedly on Trump's behalf, were objectively ridiculous. The thing is, he wasn't a personal assistant to some reality star, insisting that their butt looked great in those jeans even though we could all see the weird seams on TV. Allegedly lying on behalf of your boss makes you a loyal servant, but allegedly lying to your countrymen on behalf of the government? That's propaganda, and sorry, Sean, it's not cute.