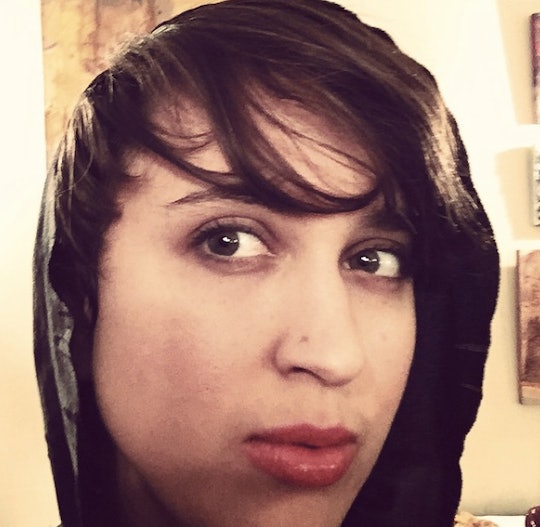 Actually, Sex During My Third Trimester Was Awesome

I loved sex in my third trimester. I loved how it felt; I loved being able to feel sexy when I was 90-percent baby; I loved making that connection with another person at such a unique moment in my life. Maybe you think I'm depraved for even thinking about sex when I'm incubating a human life. Maybe you've tried third-trimester sex and it wasn't for you. But the way I saw it, I didn’t have to worry about getting pregnant again, I could get in some exercise that didn’t leave me winded, and orgasms are good for you. All in all, sex during my third trimester was pretty damn great.

Yes, I had a small boulder in my tummy, and this limited me physically. No, I didn’t exactly know where anything was anymore, because the landscape of my vagina had shifted and I hadn’t seen past my navel in a month or two. Yes, it was painful at first, before I figured out how to position myself with a partner. But holy cow, was it fun!

I loved my pregnant body. In general, I wouldn’t call myself so much “confident” as, “I have accepted my awkwardness and can make it work for me on occasion.” But I felt effortlessly, unstoppably hot when my stomach was the size of Canada. When I am not pregnant, which is most of the time, I fight with my skin and my hair a lot, but those two things smoothed out in my pregnancy toward the end of my first trimester. With my silky mermaid hair and my glowing complexion, I looked like an earth mother. I'd always thought pregnant women were beautiful and sexy, so I wasn’t necessarily surprised to feel this way, but I really, actively liked the way I looked.

I was already a sexually adventurous person before getting pregnant, and this did not go away when I got pregnant. My pregnancy also added an interesting ticking-clock element to my sexual experiences. I wasn’t planning on getting pregnant again anytime soon; in fact, I hadn’t been planning to get pregnant this time around, and was planning to place my son for adoption. (He lives with a wonderful gay couple now and I see them all the time — it’s a story with a happy ending.) So with only nine months to experiment, and an intense, innate curiosity on what pregnancy sex would be like, I very much wanted to get my pregnant freak on before my time ran out.

When he said he wanted to (and I quote), “take you home and have sex with you,” he didn't expect me to actually say yes. But I did.

So there was a hookup in the first trimester with a polyamorous guy who couldn't spend the night, and I dabbled with group sex in my second trimester (twice in one week). These experiences were fun and sexy, but emotionally unfulfilling and a little bit impersonal. Despite my sometimes-experimental sexuality, I realized that I didn’t actually want anymore one-offs at that moment in my life. I wanted sleepovers and cuddling and brunch in the morning. I didn’t expect to meet the love of my life, but I very much craved connection.

Right as Trimester Three began, I met a friend of a friend named Irving. I found out that Irving had a personal rule: He'd say yes to any woman who asked him out. I remember him saying, “I figure, she put herself out there, the least I can do is give it one date.” And he was cute, so I figured, why not? I asked him out that night via Facebook message. Per his rule, he said yes.

And wonder of wonders, we had actual chemistry! We greeted each other with a warm, long hug, and bonded over complaining about our jobs. However, he clearly had hangups about my pregnancy, asking questions like, “How wrong is it to be attracted to a pregnant woman?” I was surprised by this; why would it be wrong to be attracted to a pregnant woman? Especially when she asked you out? “I don’t blame you,” I said. “I mean, I look great.” He laughed and said, “Yeah. You do.”

I missed sex. I missed being touched. And I liked him.

When he said he wanted to (and I quote), “take you home and have sex with you,” he didn't expect me to actually say yes. But I did. His response was, “Really?” Me: “Yes!” Him: “…Really?” It took a while to convince him that I was serious, but once I did, we went home together.

Sex with him the first time was a little painful. I didn't know yet how to position myself so that it wouldn't hurt. It wasn’t awful, just not perfectly smooth sailing —pressure on the wrong vaginal walls or something. I still enjoy sex when it hurts a little, though. It wasn’t so much distressing as, “OK, we’re learning!” (We also were pretty much limited to missionary position due to my tummy.) But the intensity factor was deliciously high. It'd been a very long time since he’d slept with someone, and the unleashing of all that sexual frustration led to a very enthusiastic night of sex for both of us. When pain shows up as a byproduct of passion, I don’t mind it as much.

I missed sex. I missed being touched. And I liked him. I liked that he was kind of awkward, like me. I liked it when he fell asleep on top of me. I had forgotten what it was like to have sex with someone I wanted to see again. We both agreed that we should do this again sometime.

I didn’t fully realize at the time that having sex later in pregnancy was taboo. I certainly knew that dating during pregnancy was unexpected. All the pregnancy books I’d received just tacitly assumed that whoever got you pregnant was your husband, but I ran with a liberal, artsy crowd who understood that single mothers are a thing. It didn’t even cross my mind to judge myself. Nor did it occur to me that sex during the third trimester would be perceived as any different than sex during the second. And why would I stop having sex just because my belly had gotten to a certain size? Irving knew about my adoption plan, so there was no implicit question about whether he’d ever have to take on a fatherhood role. My son’s due date was still months away. We could just have fun.

The next time we slept together was pretty great. I don’t know if it’s just that we’d had a chance to work out the kinks, but it was not painful at all. We went from, “OK, we’re learning!” to “We got this!” We were able to go at it for longer than the first time, and there was a tenderness to it that hadn’t been there the first time —though maybe that was just the Adele album he put on in the background playing tricks on my mind. Whatever it was, the passion and intensity were definitely still there.

Later, sex would become less appealing to both of us. The muggy New York City heat and my swollen aching feet made me feel considerably less sexy after awhile, and Irving confessed that he found it distracting to have “another man’s baby” present in my body during sex. (Frankly, I thought we should keep at it anyway, but he disagreed.) Eventually, we paused things until after my son was born. But even though it was brief, I look back on my third-trimester sex with fondness, and even a bit of pride. I’m proud that I kept living my life, even as my stomach approached outlandish proportions. I’m proud that I didn’t shut down my body’s capacity for pleasure.

More Like This
11 Signs You're Sexually Attracted To Someone, But Not In Love With Them
A C-Section Actually Doesn't Take As Long As You Think, According To Experts
Who's Getting Abortions? Mothers. 59% Of Abortion Patients Already Have A Child.
43 Instagram Captions For National Brother’s Day That Say It All