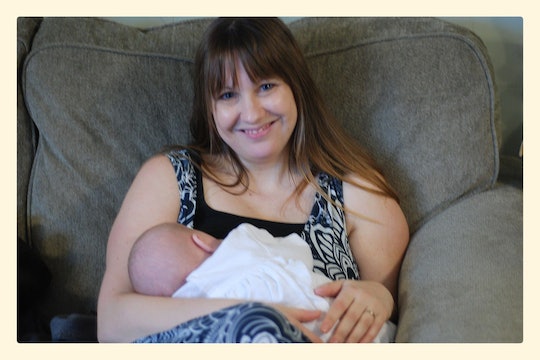 I am nursing my third and last child. He’s 3 years old now, so I've been nursing him for well past the American Academy of Pediatrics' recommendation of six months of exclusive breastfeeding, and well past the World Health Organization's recommendation of two years. I’ve nursed all my children beyond those guidelines: I breastfed my oldest for three years and three months, and my middle son for four years and two months. I nursed them all in public, without a cover, both when they were itty-bitty and when they were bigger. While the older two night-weaned at 15 months each, my 3 year old still nurses to sleep every single night. “Mama milk,” he asks. “Me want mama milk.”

I’m proud of all this nursing I’ve done for my kids, as well as the nursing I did for others — when I breastfed my godson, when I pumped for other people who needed it. I’m proud of it all.

It’s OK for moms to be proud of breastfeeding their kids, without shaming women who don't breastfeed. We don’t shout it from the rafters. We don’t brag about our mastitis and clogged ducts. We don’t tell everyone about how we had bloody nipples after one kid was born (he had a lip and tongue tie), or how our toddler insists on grabbing our breasts when we nurse (so annoying). Many of us keep quiet for fear of offending. After all, we were lucky enough to nurse. So many moms can’t.

We did an amazing thing, us breastfeeders. We fed our children with our own bodies for one month, six months, a year, or beyond. And while nursing can be easy, nursing can also be difficult and challenging, like what I went through with my youngest son's tongue ties. We need to celebrate both the easy and the hard, the Kodak moments and the toddler groping alike. I’m proud that I nursed three kids for at least three years each, and I’m proud that for a lot of that time, I was nursing two children at the same time. It’s like the slogan on the old La Leche League shirt: I make milk. What’s your superpower?

But most of us don’t wear a shirt like that, and we don’t brag about our nursing stats. Some of us are too afraid of offending the formula feeders, the women who choose not to breastfeed or can't for whatever reason, be it medical or psychological. We’re afraid that if we’re loud and proud about our breastfeeding, we’ll offend them by insinuating that they should have breastfed. That they’re less of a parent for bottle-feeding. That whatever reason they had for formula-feeding wasn’t good enough, and they should have tried harder.

But of course, that isn't the case. Mothers who formula-feed are just as good as moms who breastfeed. But there's no reason why one group can't celebrate their accomplishments, without being accused of shaming or demonizing the other.

I can’t police moms' personal reasons for not breastfeeding. Breastfeeding is the biological norm, but that doesn’t mean that people don’t have good, justifiable reasons for using formula, or that formula isn't a viable alternative. And just as they deserve support for formula-feeding, I deserve support for nursing. In fact, I deserve to be proud of nursing in a country where only 49.4% of moms make it to six months, and only a mere 26.7% make it to one year. I’m even one of the vaunted 18.8% that made it to six months without supplementing. In the face of those numbers, I deserve to be proud.

So I’m proud of myself for breastfeeding, and that says nothing about anyone else other than my kids, who took to the boob like pros. I’m proud that I’ve nursed them all for so long. They deserved it, and my youngest still does. I’m a happy and proud breastfeeder. That’s more than OK. That’s merited.