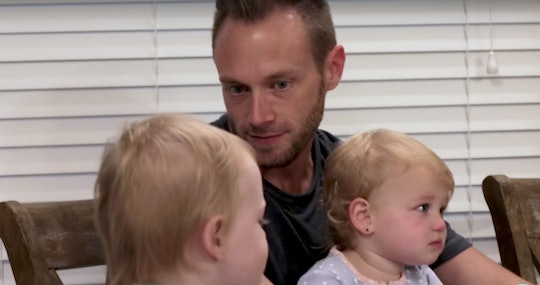 Adam Busby Bravely Talks About His Postpartum Depression On 'OutDaughtered'

"When I'm having bad days, I just get super quiet," Busby confessed to Wilson, according to People. It's clear from the show that being a parent to 2-year-old quintuplet daughters and a 6-year-old daughter is beyond overwhelming. Even though Busby's wife Danielle is there to share in the parenting, it's still no easy task to wrangle six kids ages 6 and under.

Men's health is a topic burdened by machismo and invincibility. While Busby's candid admission about struggling with postpartum depression was largely met with support, there were plenty who criticized him as being somehow "weak" or "not a real man." Not only is this cruel, it's just wrong. Depression — postpartum or otherwise — does not make you less of a man. And yet, it's obvious from a clip of Tuesday's OutDaughtered that even Busby himself has struggled to push through these same misconceptions about men and mental health.

When Wilson suggested the possibility that Busby seek out professional help, Busby balked. "I’ve always felt like people who have to go see a therapist can’t control things, can’t do things on their own,” Busby shared after a moment's pause, according to People. “A big part of this is I’m still kind of scared. I just don’t know if that’s for me." However, by the end of the clip, it seems as though Busby is ready to take that next step — not just for his own sake, but for his family's, too.

The new episode of OutDaughtered will air at 9 p.m. Eastern Time on Tuesday on TLC.