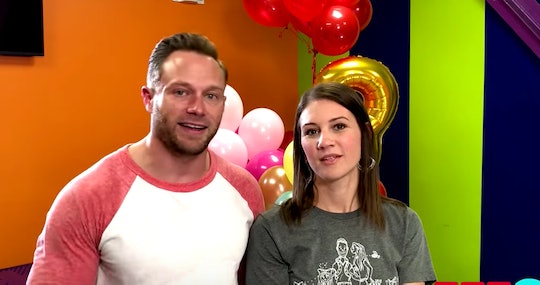 When the world was first introduced to Adam and Danielle Busby in 2016, their particular situation was difficult to imagine. See, first they had a daughter named Blayke. About four years later, she was followed by not one, not two, not three, but five more daughters all at once. Yep, the all-girl quintuplets — Ava, Riley, Parker, Hazel, and Olivia — definitely shook things up a bit in the Busby household back in April, 2015. Viewers who have followed along with the TLC show Outdaughtered through the years have gotten to see the transformation their lives have undergone. And Adam Busby's Instagram shows there's never a dull moment with six daughters.

Back in the day when the quints were tiny, immobile babies, life for the Busby's was a blur of never-ending diaper changes, feedings, and getting the girls to just go back to sleep already. And those early photos of all the sisters together? They were just too precious. The selfie stick family shot below marks the very first Instagram shot of all eight Busbys together. As you can see, three of the five quints don't look too happy at all, one is chilling, one is sleeping, and big sis Blayke is giving the camera a close-up view of her foot. And yet, mom and dad are laughing through the chaos. Because what else can you do when you're "outdaughtered" to this extent?

Because the truth is, the quints have come so far since those early days in the NICU. A November, 2015 post on World Prematurity Day illustrated this perfectly. "I can’t believe how far our 5 little miracle princesses have come in just a few months," Adam wrote, alongside a photo collage of each of the quints in the NICU. "They were all born just barely over 2 lbs at 28 weeks and 2 days. I am amazed each day at God’s grace on our family for bringing these babies though nearly impossible odds."

Even if you haven't seen a single episode of Outdaughtered on TLC, Adam Busby's Instagram account can give you a good idea of what raising so many little ones at once is really like. For starters, you literally cannot hold all of your children on your lap at once. And as Adam pointed out, he pretty much had the expression below on his face throughout the quints' first year of life. Just look at all of those squirmy babies!

Adam also revealed back in the day the logistics of bathing five infants. Spoiler alert: It included an assembly line.

And can you imagine their early morning routine with five babies?

This time lapse from July, 2016 pretty much speaks for itself how exhausting life with five babies can be.

These days, though, the Busbys are even busier, if possible. That's because the quints celebrated their third birthdays in April, according to the family's blog, and look a little more like this. (OMG, can you believe how big they've gotten?)

Here's another recent (and totally adorable) shot of dad Adam with all six of his girls. Fun fact: two of the quints are actually identical twins, according to Country Living; and the rest are fraternal. (That's because one of the five fertilized eggs split, and the others didn't.) Look at the little girl all the way to the left of the swing and the one all the way to the right — Ava and Olivia — they're the identical ones.

Outdaughtered was recently renewed for season four, which premiered on July 10 with a two-hour special, according to In Touch Weekly.

So, yeah. If you're an exhausted parent wanting a steady dose of adorable/chaotic kid photos, then Adam Busby is someone you should be following on Instagram. And if you want even more Busby cuteness, catch Outdaughtered at 9/8 p.m. (central time) on Tuesdays on TLC. I'm not sure how he and Danielle stay sane with so many little ones going in different directions. But hey, their journey definitely makes me thankful that I've gotten away with facing the toddler years with only one kid at a time.