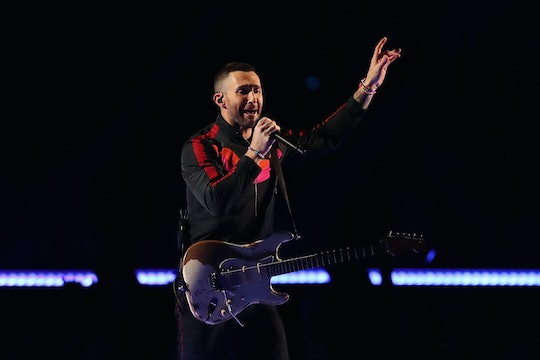 If you're an eagle-eyed Maroon 5 fan and you were paying particular attention to everyone's outfits (which I totally respect), you may have noticed Adam Levine's bracelets during the Super Bowl halftime show, which basically glowed in the dark. But it turns out he was wearing these particular little accessories for the cutest reason — they were for his kids.

If you were looking closely as Levine went through some of Maroon 5's greatest hits, including my personal favorite "This Love" and the once ubiquitous "Moves Like Jagger," you may have noticed that his tiny beaded bracelets looked like the kind of thing little kids make during art class in preschool that say things like "I Love Dad" or their name. Definitely an odd fashion choice for just, you know, fashion reasons. But considering that Levine was wearing them as a shoutout to his two little ones — well it's pretty much the most adorable thing ever. I mean my own father has never performed at the Super Bowl halftime show (thank god) but if he did, I think I'd love such an adorable shout out! It's gotta be fun watching your father perform in front of millions (assuming it's what he does for a living). And it's even more adorable to have such a cute little shout out.

Levine has two daughters with wife Behati Prinsloo, Dusty, 2, and Gio, 11 months. In an interview with Entertainment Tonight, Levine explained that his little girls wouldn't be in the actual Super Bowl audience because they're "too little," but he did want to let them know that he was thinking about them. "I am going to wear daddy bracelets so they can see that I am representing them well," he explained. "They get to watch on TV. I am sure they prefer that too, instead of the chaos."

But while his daughters couldn't be there in person, Levine said in the same audience that his wife, Prinsloo, certainly would be there to support him. "My wife will be out here, though, very soon, which will be nice. But [the girls] are going to watch on TV." There's nothing like a fun mommy and daddy date night at the freakin' Super Bowl, am I right?

During the halftime show, which Maroon 5 headlined, Levine was joined by Travis Scott (aka Kylie Jenner's baby daddy), and Big Boi of Outkast fame. The band went through a medley of their biggest hits, and the whole show ended in literal flames with Levine dancing shirtless on stage — more things I personally am glad my own dad has never attempted. Fans were kind of torn on how they felt about the whole topless thing (Janet did not get away with this!) but overall the show went off without major incident.

Some fans might have been disappointed that Scott did not take this opportunity to publicly propose to Jenner or announce a second child, as was gossiped about, but I am personally pretty glad the show ended where it did.