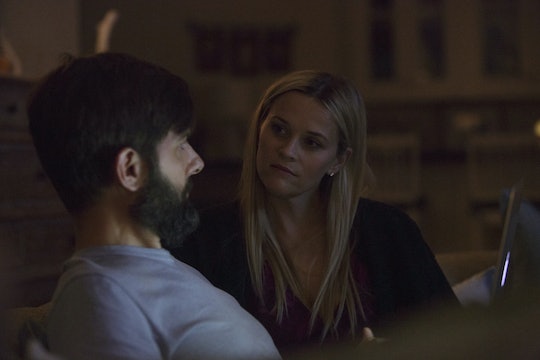 Ed Made A Big Change In The ‘Big Little Lies' Finale

Warning: spoilers from the finale ahead! If your mind is still reeling from the downright gripping finale of Big Little Lies, believe me when I say you aren't the only one. That episode was intense, and I do mean that in the best way possible. But as gasp-worthy as all the big reveals of the night were (Bonnie pushing Perry to his death, for example), there was one revelation that went unnoticed by many. Adam Scott without a beard in the Big Little Lies finale was easily one of the most puzzling details of the night, for me at least. And boy did it make my mind run wild with theories.

First of all, why did no one say anything about Ed's lack of a beard during the highly anticipated Trivia Night. Not a single person made reference to the fact that the bottom half of his face just went through a complete makeover. I mean, what gives? That'd be like if I decided to dye my hair neon purple and no one noticed. (OK, maybe that example is extreme, but you get the idea.) But even if you put the community's lack of a reaction aside, there's also the question of why Ed decided to do this in the first place? What caused him to shave his beard? I have a few theories...

It's Symbolic Of A Fresh Start

Ed clearly knows something is going on between Madeline and Joseph, especially since the latter's wife kept eyeballing Madeline all night. He may not know the specifics of what went down, but I think he has a good idea. Maybe losing the beard was his way of attempting to start fresh with their relationship and wipe away any sins of the past.

He Was Simply Getting Into Character

The theme of the night was "Audrey and Elvis," and considering that The King wasn't known for rocking a serious beard like Ed, he may have decided he'd look more like the iconic singer if he changed up his facial hair a bit.

He's Preparing To Take On A New Identity

Bear me with here on this one, but what if Ed is getting ready to leave town (and Madeline) behind to start a new life elsewhere... say, Pawnee, for example? OK, fine, that's just a pipe dream on my part, but come on. Don't tell me you didn't think of the potential Parks and Rec crossover. A girl can dream!

Suffice to say, I have no clue why Ed did what he did and why the writers thought Adam Scott should go beardless for the finale. But either way, I was intrigued by it and boy am I going to miss this show.