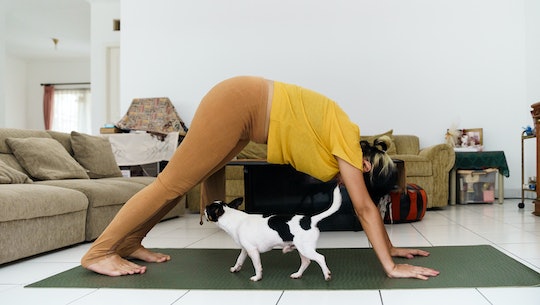 The last time Detroit resident Carly Lesoski was pregnant was during the Zika scare nearly four years ago, when the virus was linked to thousands of babies in Brazil born with microcephaly and other developmental issues. Now, Lesoski is 13 weeks along with her second child and she’s terrified of contracting the novel coronavirus, which results in a disease named COVID-19.

“I have a 3-and-a-half-year-old and I had really bad postpartum depression with him, so I’m already predisposed to anxiety,” Lesoski says, adding that she’s mainly worried about the lack of information about how COVID-19 affects pregnant people.

The American College of Obstetricians and Gynecologists (ACOG), in communication with the Centers for Disease Control and Prevention (CDC), is closely monitoring the outbreak, which had resulted in more than 114,000 cases and led to more than 4,000 deaths globally as of March 10. Cases crossed the 1,000 threshold on March 10 In the United States, with 31 deaths recorded.

“It’s understandable that pregnant women would be concerned about exposure to the virus and any negative effect it could have on their health and the health of their fetus,” ACOG vice president of practice activities Christopher Zahn, M.D., said in a statement. “As with other viruses, we believe pregnant women may be at higher risk of severe illness, morbidity, or mortality compared with the general population. However, currently very little is known about COVID-19, particularly related to its effect on pregnant women and infants...”

At the same time, new guidance from the United Kingdom’s Royal College of Obstetricians and Gynaecologists released on March 9 suggested that pregnant women were no more susceptible to the virus than the rest of the population, and likely to experience mild or moderate cold/flu-like symptoms. But where pregnant people have chronic health conditions, severe symptoms should be “identified and treated promptly.”

The lack of definitive information, in addition to President Donald Trump’s continued attempts to downplay the outbreak, is part of the reason why many pregnant people, like Lesoski, remain confused and concerned.

“I don’t know what information to believe. I don’t know how worried I need to be,” Lesoski says, adding that the worries remind her of her experience being pregnant during Zika.

“I just remember being nervous to be in public, which is sort of something I’m feeling now. It was just general dread and panic,” she says. Although no cases have been confirmed in Michigan, where Lesoski lives, she worries whether it’s largely due to the limited number of test kits available.

[There's] something about being pregnant; all of sudden you’re responsible for another life and the thought of anything happening is terrifying.

According to a 2018 study by researchers at the University of Bristol and the University of Oxford, pregnant people are 51% more prone to anxiety and depression than they were a generation ago. Various factors, including the pressures of work, financial strain caused by increased cost of living, and general burnout, are likely contributing to this spike, a study author told The Independent in 2018.

“I’m normally a very chill person,” says Denver resident Mary Farrow, who is 27 weeks pregnant with her first child. “But [there's] something about being pregnant; all of sudden you’re responsible for another life and the thought of anything happening is terrifying.”

In Colorado, where Farrow lives and works, there hade been 15 confirmed cases of coronavirus as of March 10; the same day, Gov. Jared Polis (D) declared a state of emergency as new cases cropped up in three counties. The state has only 900 test kits for the coronavirus, but Polis said he is asking the Trump administration for more.

“Pregnancy’s already caused more anxiety in my life than before and now there’s a global pandemic on top of it,” says Farrow, adding that as a survivor of thyroid cancer, she worries about whether she is at greater risk of catching the virus.

While Lesoski and Farrow said they will likely be able to work from home if the outbreak worsens, many other pregnant people work in industries — like retail, hospitality, or healthcare — where tele-working is not an option. Furthermore, the United States has no federal legal requirements for paid sick leave and, in some cases, state sick leave policies do not apply to part-time employees, who are disproportionately women. So while the CDC has urged those who are sick to stay home, part-time, low-wage, and gig workers who do not want to lose pay may feel forced to go into work anyway.

Students face similar troubles. Alexandria Russell, an undergraduate student at the City University of New York (CUNY), is 13 weeks pregnant and frustrated with the school’s response to the outbreak, saying that the chancellor should close the school and take steps to move classes online. More than 170 coronavirus cases had been identified in New York at the time of publication.

“The concern for me is the fact that it’s almost like the schools are saying, ‘Let’s just wait until someone actually gets infected until we actually do anything about it.’” says Russell. ”What if somebody already has it? There’s people walking around right now that might not know they have the virus.”

Worries about the coronavirus and what she sees as the school’s limited response have exacerbated Russell’s existing pregnancy anxieties.

“After I found out I was pregnant, the anxiety took over everything. I avoid escalators, I don’t take the stairs. I’m constantly afraid of falling. I’m afraid of eating the wrong thing,” she says. “At one point, I was told I had a detached placenta and there was a 50/50 chance of miscarrying,” she recalls. “The fact that I was able to make it this far, I’m grateful, but I’m still worried.”

As the crisis continues, Lesoski, Farrow, and Russell are trying to manage their anxiety in their own unique ways. Lesoski said she goes to therapy regularly, Farrow tries to channel her fears into prayer and avoids the news, and Russell meditates and listens to music.

But the best anxiety remedy, Russell said, is looking at sonogram photos.

“There’s nothing like looking at those pictures. It just does something to my heart.”

More Like This
When Does Pregnancy Horniness Kick In?
Pitocin Induction: What It Is & The Play-By-Play
Can You Bowl While Pregnant? Experts Weigh In
Considering Getting A Tattoo While Pregnant? Here’s What To Know