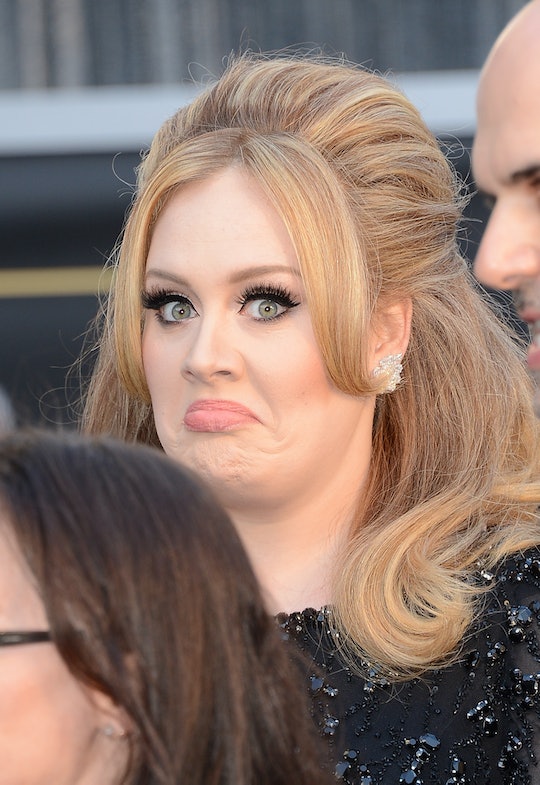 Adele On 'SNL' Was Pretty Much Perfect

Talk about opposites attract. Host Matthew McConaughey's opening monologue on Saturday Night Live last night had everyone Dazed and Confused. And then Adele performed on SNL and was virtually flawless, making everyone in the audience like her more, if that's possible. Saturday Night the singer, whose third album, 25, dropped Friday, showed up on SNL to poke fun at herself and belt out all the tunes you've been singing in the shower since they came out.

The new album is possibly even more personal-yet-universal than the last one. There’s a reason you can’t stop singing along — she’s talking about all of your feels. Saturday on SNL she belted out "Hello" and "When We Were Young," the first two songs from 25 that she released videos for (and thus those people are most in love with, especially in the case of "Hello").

Her performances were preceded by a pretty hilarious sketch in which the SNL cast played a family fighting at Thanksgiving dinner, as families are wont to do. Every time the conflict escalates, the one kid at the table turns on "Hello," at which point everyone throws themselves into singing the ballad. Each time, they all look more like Adele in the "Hello" video — blond locks, voluminous fur coat, abundant wind, and all.

It was a hard act to follow, but unsurprisingly, Adele followed through. The best part? When, after a gorgeous rendition of "Hello," she did her characteristic funny face, revealing her nerves and humility. You know, because Adele is just like us. Except for, you know, that voice.

I mean, just check out the insanely perfect live mic feed of her performance:

So it's true, they could have done more sketches with Adele tonight. More Adele is always better. But it was pretty great.