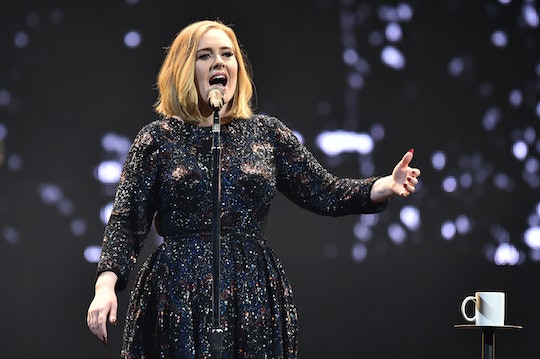 I’ve got to be honest with y’all: I’m an Adele fangirl. I love her music. I love her brashness. I love the crass and vulgar language she uses (IRL, not in her songs). And I love her openness. I love her honesty. And just when I thought I couldn’t love Adele anymore, she stilled my heart. How? By talking about the reality of pregnancy — i.e. the not-so-pretty and far-from-perfect side of pregnancy — and by doing so at a concert. That’s right, during a recent show in Glasgow, the 27-year-old singer was admiring some of her bearded fans between songs (because, well, why not) and during the course of their interaction, Adele admitted she grew a beard while pregnant with her son, Angelo, according to PerezHilton.

According to The Mirror, Adele went on to explain the strange pregnancy side effect to her fans:

When I got pregnant I had so much testosterone in me that I grew a beard. I only cropped it last night. It’s actually true.

When the crowd laughed, Adele added:

I’m not telling a joke. I actually have a beard, but I’m proud of it. I call it Larry.

[While] I think Adele is probably over exaggerating the beard issue...I will tell you that hair starts to pop out of strange places during pregnancy — around the nipples, more hair on the head and everywhere in general due to the hormones.

And whether it is an exaggeration or not, doesn't matter: Adele's bluntness and candor are huge! Because these "changes" do happen. These changes are natural. And these changes are something no woman should feel embarrassed about or ashamed of.

That said, make no mistake: I know most women would probably avoid admitting they grew a beard during their pregnancy — or had hemorrhoids, impacted stools, or sweat through three shirts in two hours (all symptoms yours truly experienced) — but Adele is not one of those people. Adele loves herself and can obviously laugh at herself. (I mean, hell: You have to have a sense of humor to name your facial hair.) And Adele doesn’t give a damn what others think of her.