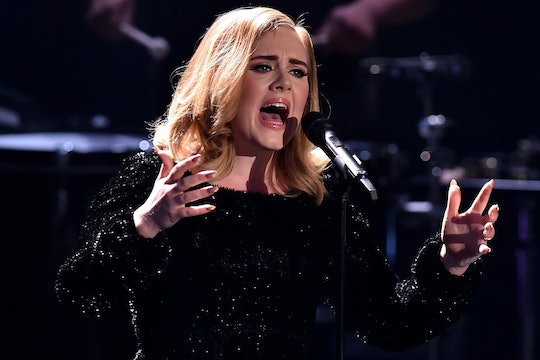 Adele Talks About Her Son, & Shows The World What Unconditional, Inclusive Parenting Looks Like

In case you needed more proof that Adele is pretty much the Queen of Everything — and the ultimate in #momgoals — her recent comments in her amazing TIME magazine cover story will probably seal the deal. Discussing her desire to be a loving and supportive parent no matter what to her 3-year-old son, Angelo, Adele subtly referenced her son’s future sexual orientation. Discussing how she is looking forward to watching him grow, Adele said she’s excited to see who “his girlfriend or boyfriend is going to be” one day, because, she knows that, just like every other 3 year old, he could be gay, straight, or anything in between:

I can’t wait to know who his best friends are going to be, who his girlfriend or his boyfriend is going to be or what movies he likes… Whatever my kid wants to do or be I will always support him no matter what.

Adele’s comment is totally admirable, not just because she’s “OK” with the idea that her son might be gay, but because it’s something she mentions so nonchalantly that it’s clear it was never an issue to begin with. As she notes, it’ll pretty much be just another aspect of who he happens to be, and that’s a perspective that all children deserve to receive from their parents.

Even though her comment wasn’t intended to be a huge revelation — it was only part of her answer as a whole — it’s received a lot of buzz, with many seeing it as an example of how Adele would feel if her son were gay, or what she would do if Angelo were to come out. But to focus on that, as though that’s actually what she was saying, is to miss the point almost entirely: We don’t need to ask her how she would feel or what she would do, because she would feel the same way about him being gay as if he were straight, or if he liked sports, or Star Wars, or playing the drums. Adele’s perspective matters, but only because it’s one that all parents should consider — that, just like Angelo, any of our children could turn out any kind of way, and there’s nothing wrong with that.

But her own son aside, Adele is still a big supporter of LGBT rights, sharing in the past how her fans have expressed how her music helped them become more accepting of themselves, and in some cases, has given them the courage to come out, according to Towleroad.

No matter what your feelings about Adele (although, seriously, how can you not love Adele?!), she is definitely a great choice for an amazing mom role model.