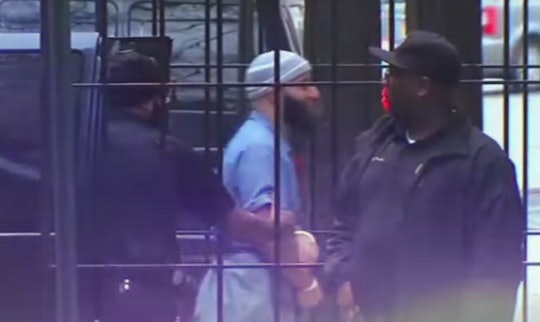 Adnan Syed finally has an opportunity to clear his name. The man convicted in the murder of high school student Hae Min Lee is getting a retrial, prompted in large part by revelations made after Sarah Koenig explored his story in the first season of the groundbreaking Serial podcast. Adnan Syed's comments on his retrial reveal that, while he may not see an easy road ahead, he is eager to pursue an opportunity to advocate for his innocence.

Though it appears as though Syed has not released an official statement, attorney Justin Brown revealed Syed's state of mind in a tweet on July 1: "Adnan has been informed of the decision. He's extremely happy about it, but he understands we still have a long way to go. #FreeAdnan." Brown elaborated in an interview with People, saying that Syed is "more hopeful" and adding that "his spirits are high" as the Maryland retrial approaches:

He's doing well. He's very excited by the news but he's also very understanding of the legal process and he understands that there is a lot more work to be done on this case. He's going to be patient with that and let it run its course.

Though the state could decide not to charge Syed again, the Maryland attorney general's office announced that it trusts the initial conviction and intends to "defend" it. Brown told People that he's still deciding whether to pursue bail; in the meantime, he's bringing on additional attorneys to strengthen their position.

Back in February, Brown published an article to his firm's website describing the time he spent talking with Syed in prison; he wrote that though the guards shackled him, Syed never asked for his restraints to be removed. He added that he felt the guards liked Syed, meeting respect "with respect." Later, he provided a brief overview of the day he and Syed watched the alibi witness give her testimony in court. He ended the post by writing that he and Syed had the chance to converse during breaks in the proceedings:

He asked about my wife and kids. They are people he has never met. I could not help but imagine what it will be like some day when he visits my home.

Serial host Koenig wrote that the news of a retrial shocked her, according to People. The decision from Judge Martin P. Welch is based on the unreliability of location data collected by a cell phone tower, a piece of evidence called into question after Serial's investigation drew attention to the original trial. In a blog post on the Serial website, Koenig wrote that she'd first spoken with Syed after Welch denied a request for "post-conviction relief" in 2013:

At the time, it seemed to me Adnan was spinning optimistic. Possibly falsely so. I mean, his legal options, by any clear-eyed assessment, were moribund. And yet Adnan struck this familiar jailhouse posture: ‘If only someone would take another look…’

It's uncertain whether Syed will ever get to live outside of a prison cell, but Welch's most recent decision offers him hope for a different outcome.