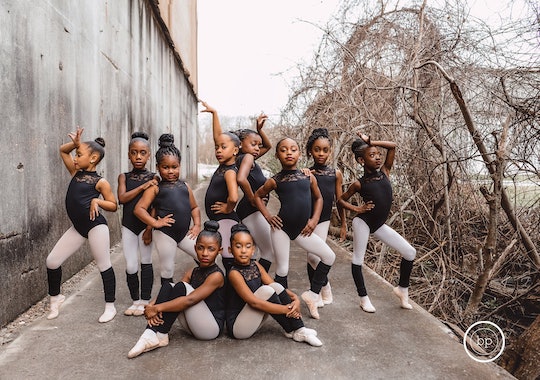 Little did one fierce group of tiny dancers know that a photo of them posing just for fun would send such an uplifting message to people all across the country. Photographer Brandie Perry of Beaumont, Texas, tells Romper that she didn't anticipate that her photo of the 10 adorable ballerinas would go viral, but with February being Black History Month, it was meant to be.

"It started off as photos of friends going to dance together and getting pictures," says Perry, whose photo of the girls has garnered thousands of likes on Facebook, "but they all look up to Misty Copeland, and it's Black History Month, so it couldn't have happened at a better time."

Copeland, of course, is the first African American principal dancer at the American Ballet Theater. Angela Malonson, whose daughter posed in the photo, told Good Morning America that Copeland serves as an inspiration to the young girls. "We just don't see a lot of people that look like her... people of color, brown people that take ballet," Malonson told GMA. "Misty Copeland came along and paved the way."

Perry says that while the girls — who are all between 7 and 8 years old and attend the iRule Dance Studio run by CharLee Hanna-Rule in Beaumont — are "still babies," they're dedicated to dance. "They've got the look and the dedication on lock," she adds.

The viral photo, which was taken near Downtown Beaumont, has been shared more than 14,000 times and attracted more than 3,700 likes on Facebook since it was first shared on Feb. 11.

"Ballet used to be my happy place, growing up," one admirer commented on Facebook. "And so, it makes my heart happy to see young black and beautiful ballet dancers. There were not a lot of us back then, and we're still fighting to take up space. Change and transformation are necessary and I love it!"

"I love this photo!" another wrote. "LIVE and get 'em with ya little bad selves! Strength!"

"I see you superstars!!" one more added. "The beauty in these princesses."

"Each one with their own contribution to Black Girl Magic," another said. "Awesome!"

The photos have even grabbed the attention of actress Gabrielle Union, who posted a group picture with the words "Future is now" written over it.

Just as Copeland is an inspiration to these young girls, Perry, a mother of four whose daughter also dances at iRule, hopes these dancers can inspire others as well. "I want them to show them that you can be and do anything you want to do," she says. "It doesn’t matter what color you are, what size you are, or what age you are."

"I hope that if nobody, just a couple of people — even if it’s not dancing, even if it’s just something that they’re passionate about — will see that other little girls are following their dreams and do the same."