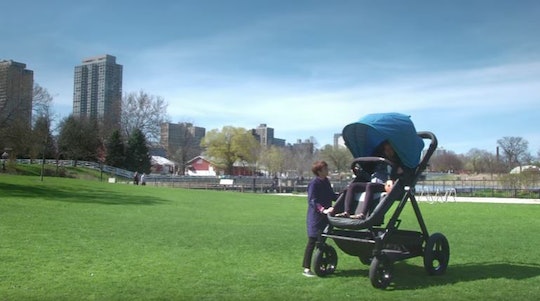 For every parent who's ever pushed a stroller around the zoo, mall, or museum and secretly fanticized you could crawl in there for a quickie power nap, I have some really excellent news for you. Adult-sized strollers exist and will officially make you jealous of your baby's ride. You can't actually buy this magnificent invention; it's a marketing gimmick for the stroller company Contours, so parents can get a feel for the experience their kiddos get being wheeled around. But, still, it's amazing.

"We created an exact, adult-sized replica of one of our best-selling baby strollers and invited parents to try it," the video's host said in the YouTube video, according to TODAY. "Showing just how comfortable Contour strollers are for babies."

And parent's reactions unsurprisingly range from "cozy!" to "I love it!" The host even gives parents the full kid treatment, including a gentle rocking and a rendition of "Twinkle Twinkle Little Star" that left more than one parent sighing with pure joy. "That's nice!" one lady exclaimed. Another guy actually sucked his thumb.

For parents like me, who have kids who refused to ride in a stroller, this is official confirmation that I wasn't, in fact, inflicting torturous confinement on my kid. It really is the best ride in town no matter where you're going. Don't take my word for it. Just watch this most epic baby stroller test drive for yourself.

If you're like me and now officially dying to get into a stroller for grown-ups, you can't. In fact, after trying to hunt down where the test rides were taking place, it looks like you can only get a ride in Chicago. The idea came from ad agency FCB Chicago, who works for the stroller manufacturer Kolcraft. Bummer.

Sure, we get that this isn't something that's in mass production, but I'd like to suggest that Contour is missing out on a big business opportunity. I mean, I'd be happy to shell out a few bucks just to have a comfortable cruise through Costco. I could agree to join friends on their competitive marathon runs, that is if Contour could make a jogging stroller model. Just think of all the amazing applications for an adult stroller. Seriously endless.

Ever been to Las Vegas? I mean, there's just a certain time of night where you've walked a million miles through identical casino lounges and you're just done. What if you could crawl into your own stroller for a ride back to the room? Disneyland? Let's face it, the kids are good to go through hours of Mickey Mouse madness. But the same can't always be said for mom. What if your little hooligans, all hopped up on Dole Whip, could push you around for just a few more rides before calling it a day? Everyone wins. And I'm not the only one to think of the idea.

So Contour, I know you probably came up with this adult stroller idea as a bit of a goof to get a little marketing attention, but let's not just dismiss this idea. This could really turn into something major. Imagine a new fad with tons of tired moms and dads getting pushed to the park by amped-up kiddos?