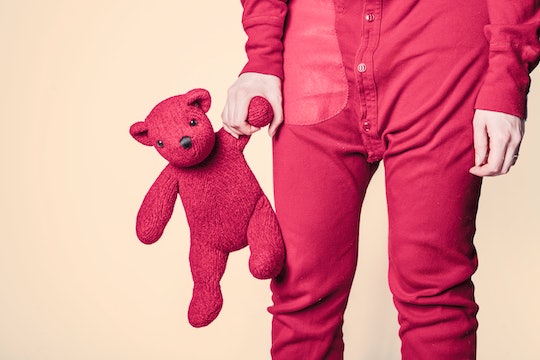 Adults Who Dress Like Babies Now Have Their Very Own Store

Some Chicagoans may need a time out. Adults who dress like babies now have their very own store in Chicago and residents of Mount Prospect are up in arms. A retailer selling diapers in larger sizes for adults has opened up shop in the quiet Chicago suburb sparking loads of controversy that frankly, seems just as odd as the items for sale.

Adults who like to wear diapers, or paraphilic infantilism, is more common than you think, according to John-Michael Williams, the owner of Tykables. The Mount Prospect village store just opened in April becoming, according to Williams, America’s first brick-and-mortar shop that caters to “Adult Babies and Diaper Lovers” or AB/DL. Prior to the store's opening, Williams told Chicago’s WGN-TV he did all of his business online.

Because the store’s exterior is relatively plain and you have to schedule an appointment to enter, no one would guess what goes on behind the doors. Tykables sells diapers in large sizes and has a rentable nursery space where the AB/DL community can “play” and snap photos, which includes an oversized crib, high chair and rocking horse, ball pits, and more.

Residents have had mixed reactions to Tykables. There has been a bit of an outcry against the shop’s unique services and wares. According to the Associated Press, dozens of Mount Prospect community members protested the store’s presence during a village board meeting this week.

Mount Prospect Mayor Arlene Juracek addressed the crowd of about 50 concerned locals at the board meeting, The Daily Herald reported. “In addition to the parental concerns many of you have expressed, what we have here is quite personally one of a mayor’s worst nightmares,” she said.

The biggest issue these residents had was the shop’s “proximity to a school” and a possible negative impact that the shop may have on the neighborhood’s property values. Another complaint was against a colorful Lego-type brick window display at the front of Tykables, worrying that it would attract children into the shop.

Mayor Juracek found the Tykables' window display particularly worrisome. “When I saw the [Lego] blocks in the window—and they were clearly, by the emails we were getting, attracting kids, to the business—my first reaction was ‘Get those blocks out of the window or cover them up or something,’ because it just projects the wrong image,” she admitted.

Williams agreed to remedy this problem as soon as possible, according to the Herald. He has covered up the display temporarily with white curtains to shield it from the passersby and he plans on adding a tint to the window that would prevent anyone outside from seeing in.

Concerned citizens searched for legal means to shut the shop down, even suggesting the store had violated its business license and zoning laws by venturing outside its original plan. However, officials at the board meeting clarified that Williams was not required to get zoning or village board approval before he received his business license. They asserted that there was no legal standpoint that would allow them to shut down Tykables. Nor were there any restrictions, the officials explained, that would have justified the city denying a business license in the first place.

According to The Herald, Lance Malina, an attorney for Mount Prospect village, told those in attendance that it would be difficult for the village to regulate this kind of business because the products for sale at Tykables, adult diapers and oversized toys, are not in any way illegal. Malina continued, adding that the village was unable to ban such activities as wearing an adult diaper or sucking on a pacifier on the premises, presumably because these actions would not fall under the realm of public indecency laws.

Still, the village tried to pacify outraged neighbors. Michael Cassady, Mount Prospect’s village manager, apologized for the way citizens discovered Tykables’ particular theme, saying, it was a “clear violation of the no surprise agreement by which we try to operate.” He assured residents the village would look into reforming zoning and business licensing processes and that, in the meantime, it would survey the shop closely to make sure the business did not “go off track.”

Mount Prospect resident Brandon Richards expressed moral misgivings about the clientele that would patron such a shop. “It’s hard for us to swallow in this community,” he told the gathering. “This is not the community that I moved to.”

Okay, let’s be honest, for many people (including myself) the idea of dressing up in adult diapers and playing at being a baby is a little odd. I mean, the only time I’ve found myself wishing for an adult-sized baby item is when I wished I could hop into a stroller after walking fifteen blocks down 5th Avenue in heels. Still, if the business complies with all village business laws and only caters to a specific clientele, who need an appointment to even get inside the place, I don’t see why this is a matter to be protested. These are consenting adults entering a licensed business, it shouldn’t matter what they are doing inside as long as it is legal.

My advice to the anxious residents of Mount Prospect? Take a nap, you’ll feel less cranky when you wake up.