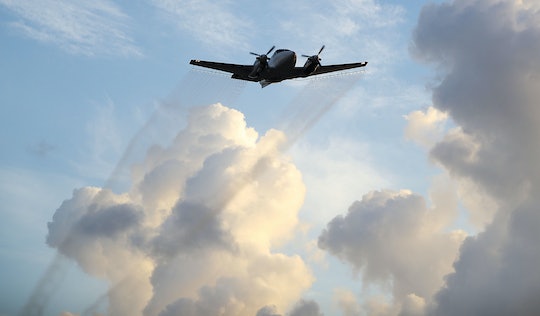 Despite mounting concerns about the consequences, aerial spray hit Miami in the early hours of Friday in an effort to kill mosquitos that may be carrying the Zika virus. After a one-day delay due to protests from locals, the chemical Naled was still sprayed across Miami today, according to CNN, and it sets a scary precedent for how the world will handle Zika going forward.

According to the U.S. Environmental Protection Agency (EPA), Naled is an insecticide used "primarily for controlling adult mosquitoes, but is also used on food and feed crops, and in greenhouses." The EPA notes that Naled can be "used for public health mosquito control programs without posing risks to people." Protesters had concerns about the possible health and environmental effects of the chemical, which kills mosquitos on contact. Among their concerns were the dangers of inhalation or exposure to vapors and the damage that may occur to their gardens. They cited the fact that the chemical is banned in 22 European countries, according to Fox News. The state, however, overrode the city of Miami and continued as scheduled with the spray. Officials have said that the chemical spray poses "no adverse effects," and the Environmental Protection Agency and Center for Disease Control and Prevention have backed that up by saying that Naled does not pose a health risk to people and pets when sprayed in low concentrations, according to CBS Local.

Still, with the existing conflicting judgments on the chemical, it's obvious why the public might feel more comfortable with a vaccine or alternate form of treatment for combating Zika. Though Naled appears to be a relatively quick and easy way to address the problem of Zika-carrying mosquitos now existing in the continental United States, its use could start a dangerous trend across the U.S. — and the world — of governments using the cheapest methods available to combat Zika instead of investing in long-term vaccinations and treatments.

What we do need is a vaccine or treatment that can protect people, particularly pregnant women, around the world. So what's the hold up? Well, vaccines take some time to develop and test, and some trials have been promising, according to the NBC News. But in the meantime, the government needs money to fund research and containment. It's quickly vanishing, and without that funding, the kinds of chemical spray used in Miami might become increasingly common across the world. What's more, sprays used elsewhere might be much more hazardous and toxic than Naled.

The spraying in Miami sends a signal to the rest of the world that it's perfectly OK to use controversial Zika-fighting methods, strong-arm local governments, and ignore residents' concerns, all while withholding significant funding to vaccine development. Since February, both Democrats and Republicans in Congress have been responsible for repeatedly failing to pass bills that would fund the fight against Zika, including another recent failed attempt to pass funding after a seven-week vacation, according to Mother Jones. The latest iteration of the Zika bill failed because, according to Mother Jones, Democrats objected to provisions which would take funding from the Affordable Care Act to pay for Zika, allow the Confederate flag to fly at VA cemeteries, and would also exclude Planned Parenthood from receiving any of the funding.

Though Naled is a step in the right direction to fighting the spread of Zika, shifting our focus to quick fixes instead of well-researched, safe solutions is definitely not the message we should be sending.