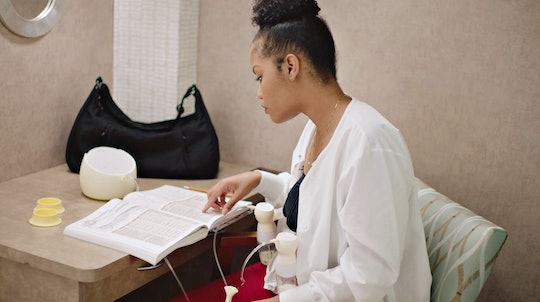 Working Mamas, Your Workplace Could Win A New & Improved Pumping Room — Here's How

Do you know of a working mom who could use a better place to pump when on the job? If so, then Aeroflow is looking to hear from you. The company has announced plans to makeover one mother's workplace lactation room. But Aeroflow's pumping room makeover contest won't just see one lucky winner pumping in comfort — it also aims to bring awareness to the importance of giving working mothers a safe and comfortable place to pump at work.

"We want to be an advocate for all breastfeeding mothers who return to work and pump three or more times a day in a cramped closet or bathroom stall," Jennifer Jordan, Aeroflow Healthcare's director of mom and baby, said in a press release announcing the makeover contest. "Their photos and stories are what inspired this contest, and research shows that when they feel supported, businesses see decreased turnover and increased productivity. Providing a lactation room is one of the most impactful ways an employer can show that support to new moms."

To help improve the experience of pumping while at work, Aeroflow has partnered with Medela, a breast pump manufacturer, to makeover one lucky winner's workplace lactation room. Those looking to enter will need to fill out an online entry form here and submit either a photograph or video of their employer's current pumping space.

Entries will be accepted throughout August with the top five finalists announced on Sept. 16. According to the contest's official rules, all finalists "will be selected based on the quality and compelling nature of [their] submission by Pumping Room Makeover Committee vote." A public vote will decide the grand prize winner, according to Aeroflow. While there can only be one grand prize winner, Aeroflow will send baskets stocked with breastfeeding and pumping accessories to all of the top five finalists.

According to the U.S. Centers for Disease Control and Prevention (CDC), 60 percent of mothers stop breastfeeding earlier than they intended to due to a variety of reasons, including "unsupportive work policies." While federal law requires most companies provide employees with both the time and space needed to express breast milk, studies continue to show that nursing employees often face challenges when pumping breast milk at work.

A recent survey of 1,000 working mothers across the United States, for example, found that 66 percent of currently or recently nursing women with children under the age of 2 had experienced "a frustration or embarrassment" due to pumping at work. According to Byram Healthcare, which commissioned the study, 33 percent of mothers said they'd had someone walk in while pumping, while 26 percent said they'd had to deal with rude comments, and 19 percent said they'd been asked to pump or breastfeed elsewhere.

Aeroflow and Medela are hoping their pumping room makeover contest increases awareness about the benefits of providing safe and comfortable places for working mothers to pump among employers. "We want to shine a light on the importance of supporting mothers in the workplace by providing a private and comfortable space to pump at work, and inspire other organizations to create similar spaces to support the women in their workforce when they return to work after baby," Melissa Gonzales, executive vice president of the Americas for Medela LLC, said in a statement.

In a press release announcing this year's contest, Aeroflow said it had received more than 550 entries when it ran its first ever pumping room makeover contest last year. Entries poured in from employees at a variety of businesses, including schools, hospitals, military bases, family-owned businesses, and Fortune 500 companies. The company is hoping to have an even greater reach this year.