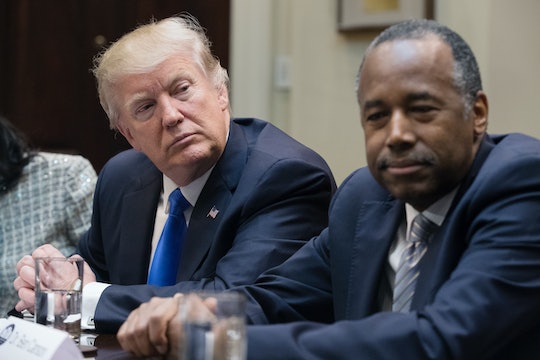 On the first day of Black History Month (and that's what it shall continue to be named in my books), vice president Mike Pence posted on Twitter that it was important to remember that President Lincoln ended slavery. The backlash was immediate. People took to Twitter to mock the Trump administration for celebrating white historical figures who contributed to black history instead of celebrating actual black people. Even celebrities joined in on the fun:

Trump also made remarks that sounded like he thought Frederick Douglass is still alive.

"Frederick Douglass is an example of somebody who's done an amazing job and is being recognized more and more, I notice," Trump said at an event celebrating the start of African American History Month (as he calls it).

Douglass, an escaped slave and abolitionist, died in 1895, and Twitter had a field day with Trump's poor choice of verb tenses. The results were pretty damn funny:

Seriously, who came up with these?

I personally would prefer that pick for the National Security Council.

On the plus side, the gaffe may garner more interest is Douglass' life and accomplishments.

The biggest problem with renaming Black History Month as African American History Month is that not all blacks came from Africa. There are many blacks with Caribbean roots, while others were born in places like England but came to America.

Trump changing the name of Black History Month to African American History Month is also controversial because the phrase African American is so politically correct. The label is considered the "safest" way to refer to blacks by white people. Referring to a racial group using a term that makes white people feel comfortable is...troublesome, at best.

Another reason why the rename is being criticized is because Trump has always associated "blacks" with inner cities and urban crime. The fact that there are black people whose lives aren't straight out of Compton is "a concept Trump has appeared to struggle with since the early days of his campaign," Vox reported.

Two days into Black History Month and the Trump administration has botched it's agenda pretty badly so far.

But on the plus side, all of the mistakes are bringing black Twitter together even more than The New Edition Story did, which is the real celebration of Black History Month.