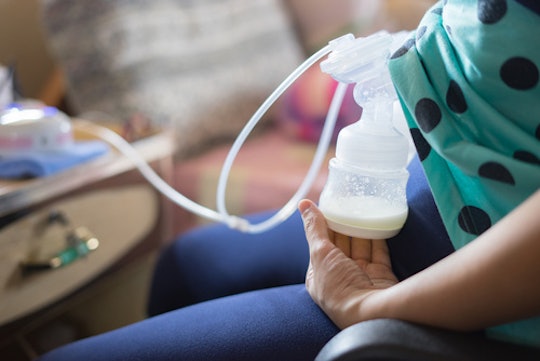 A Goodbye Letter To My Breast Pump

It's been a crazy journey, to say the least. We've spent hours and hours together, especially during early mornings and late nights. Sometimes in the middle of the night, when no one was around, I swear it sounded like you were talking to me. It was just you and me in the silence. I can still hear that constant humming noise in the back of my head. Some nights, it seemed as if you were cheerfully saying "hello." Other nights, it seemed you were mocking me with an evil laugh.

But now, our relationship has come to an end, and I'm officially saying goodbye to you, I have surprisingly mixed feelings about it. I may have lost hours of sleep over you, and you may have left me with dry and cracked nipples, but with every drop of milk that you sucked out of me, I felt proud. I may not have known it at the time, but even though I resented you, I'm grateful to you as well. Because of you, I was able to achieve my goal of feeding my daughter breast milk for a full year, and for that I will always be thankful.

When I first got you as a baby shower gift, I didn't think I'd need to rely on you so much. I thought I'd only use you every once in a while, and that I would exclusively breastfeed my daughter. But when my daughter was born, we discovered she had low blood sugar levels, so the nurses gave her formula for the first few days of her life. By the time they were restored, she had gotten too used to eating from a bottle, so she never latched again. Still, I was determined to give her breast milk, so I started exclusively pumping. I promised myself I would use you for at least six months.

I'd wanted to breastfeed so badly, but here I was, spending time with you instead of bonding with my daughter.

At first, I was frustrated with you. I'd wanted to breastfeed so badly, but here I was, spending time with you instead of bonding with my daughter. I'd imagined nursing my daughter and holding her close, not having you in my lap instead. I had to pump while she slept. I had to pump when she was awake and wanted to play. It broke my heart when someone else got to play with her instead, while I just sat there and pumped. And if no one else was around and I really needed to pump, I had to try to get her to entertain herself. She would cry and cry, and I'd be unable to play with her. I just wanted to be able to give her more attention than I was giving you. It was hard, and I really hated you.

Plus, using you was so inconvenient. When I was out, I had to ask permission or find odd places to use you, like bathrooms, waiting rooms, and even closets. I had to explain to other people why I needed to pump, or I had to awkwardly excuse myself from social gatherings. I took you with me everywhere — trips, vacations, family gatherings, even the car. All of your parts needed to be cleaned after use, and we had to stick to a demanding and brutal schedule. I felt like we spent more time together than I did with my daughter, and I resented you for this. But somehow, we found ourselves in a routine.

I found tricks to save time. I found ways to use you more efficiently. I power-pumped, which was a whole hour of pumping on and off. I tried different foods and drinks like lactation cookies, teas, and sports drinks. (Blue Gatorade was super helpful.) There were times when I wanted to toss you out of the window and never see you again. I was tired of missing out on life. I wanted to nap with my daughter. I wanted to come and go as I pleased. Then there were times I was so grateful to have you because you gave me relief when I was engorged. I was thankful that you helped me provide nourishment for my daughter.

Eventually, I came to see that you were not my enemy. Somewhere in the midst of those late nights and early mornings, I made peace with our unique relationship.

Eventually, we bonded. It took a long, long time, but eventually, I came to see that you were not my enemy. Somewhere in the midst of those late nights and early mornings, I made peace with our unique relationship. Sure, you had endless parts that overflowed in my sink, you were noisy, and you demanded a lot of my time, but you helped me keep a promise that I made to myself and to my daughter. Best of all, my daughter was milk-drunk and satisfied.

As time went on, we saw each other less often. Our sessions got shorter and shorter. I was able to return to some of my normal activities. I got to sleep a little longer. When we made it to my initial goal of six months, I kept going, because I was finally producing enough and I'd gotten the hang of pumping. I wanted to quit so bad, but how could I stop when I was finally making more than enough milk? What was my excuse? So I continued, and decided to pump for a whole year.

I eagerly awaited that one-year mark. And when it finally rolled around, and we met for the last time the other day, I thought I would be jumping for joy. But surprisingly, I felt a weird sense of loss.

I won't miss the early morning and late-night sessions. I won't miss waking up in the middle of the night. I won't miss the loud sounds you made, or how you sometimes left me in pain. I won't miss carrying you around everywhere. But I am happy that somehow, through the tears, pain, and frustration, we made it.

So I just wanted to say that while we had a bit of a toxic relationship at times, I'm grateful to you. I'm happy to get back to my regular life, but I don't think I could ever forget you. You taught me how to be patient. You taught me that there is value in sitting still, even though there was so much I had to do around the house and my mind was racing. You taught me the importance of making sacrifices, like choosing to pump instead of sleeping, or staying in instead of going to a party so I could stick to our schedule. It was hard work, but all things considered, the payoff was worth it.

So from the bottom of my heart (which is located behind my sore nipples), thank you, breast pump, and goodbye.

More Like This
Does Pumped Breast Milk Have Antibodies? Experts Weigh In
Gathre’s Winnie The Pooh Collection Is Finally Here
23 Sweet Quotes To Dedicate To Your Rainbow Baby
"Crybaby Ambulance" In Europe Will Help Exhausted Parents