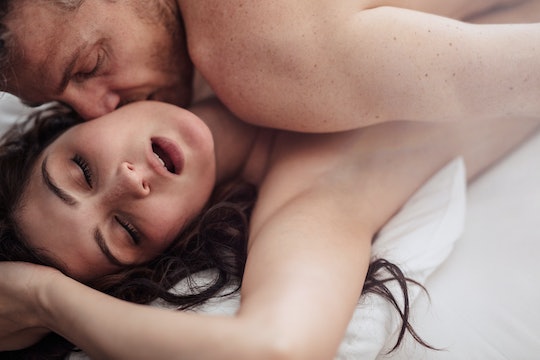 I Had To Ditch My Once-A-Day Bed Routine After Baby, & I've Never Been Happier

Sex used to be one of the most important aspects of a relationship for me. I was never tired of it, always adventurous, and counted on it as a barometer for my relationships. I was not promiscuous by any means, I didn’t even lose my virginity until I was nearly finished with college. Quite the opposite, sex meant stability in a relationship for me. It was a way to gauge whether I could count on my partner.

So when I first met my now-husband, I promptly told him I wanted to have sex every day, or, at the least, every other day to keep our relationship “healthy.” As we slowly got to know each other and began living with each other, the arguments got heated. After a night out to a concert, or perhaps an exhausting day of work, he would want to sleep. Fearful of what this would mean, I would become more demanding and — as one would guess — this was not the way to seduce someone you wanted to share a life with.

It never got better. I would constantly feel insecure the nights he was “tired,” not because I worried he was cheating, but because I felt the relationship would get stale and wither away. But soon enough I was pregnant, and then had my son. I vowed that I would still be the sexual connoisseur I had prided myself on being, but then it happened.

So tired that now I was the one opting out at nighttime. I was walking around with my husband’s college button-downs draped on me as I breastfed endlessly for months on end. And forget about privacy: my son was colicky the first few months of his life, and co-sleeping was the only way I was going to get a few hours in. I grew to like him in the bed and, sure enough, even after I had the “you’re good to go” check up with OB-GYN, I never went back to having sex every day.

Daily sex — satisfying, orgasmic daily sex — was how I felt secure in a relationship.

Sometimes I even went a whole week without it, which would have been inconceivable to my prior self. I had always felt like sex was so core to my identity that if a partner didn’t have the same appetite as me it would never work out. Daily sex — satisfying, orgasmic daily sex — was how I felt secure in a relationship. Even — or rather especially — if my partner and I were having an argument, I would rely on the physically connection of sex to soothe me and convince me that everything was going to be okay.

This was especially hard for my husband, who needed to be emotionally connected to have sex. One can only imagine the feedback loops, and the fights that could ensure. Being rejected sexually came to mean so much more — how else could a fight resolve or my insecurities heal themselves without that physical connection?

And now here I was not wanting several nights in a row; and this compounded by the fact that there were nights when my partner wasn’t tired — when I was the one rejecting him. For the first time in my life, I was on the other end of that dynamic. I can’t say I regret the pressure I had put on ourselves before, I was simply shocked and slightly disappointed in myself for not (wo)maning up now. I just didn’t have it in me.

I realized that me not wanting sex and rejecting my partner had nothing to do with him or the relationship. It was about finally recognizing my own limits — something I rarely did before becoming a mom — and understanding that I had to prioritize where I put my energy. After hours of being present with my son in the playground and at the park, not to mention the early mornings and arduous times getting him down for a nap, tapped all my emotional energy, I would feel myself hit my physical limit over and over again as my son grew up. Not just in the bedroom, but also in my work life, with friends, and on vacations. I had no choice but to do less. I could no longer push myself.

When sex did happen, it was so much more.

Sex turned into love-making. At a time when my boobs were dripping milk and I hadn't washed my hair in days, my husband’s desire made me feel loved and attractive. Every time we did make love, it was special, spontaneous, connective. I no longer needed it to show me that this relationship was exciting, would thrive. I finally knew it was, knew it would, even without the sex.

Sex was now another way to connect, not the only way to connect. Having intimate conversations or even a short night out became such a luxury that I yearned for both even more than the physical element. I came to enjoy and appreciate all the aspects of my partner, and of myself, from evaluating the new restaurant in the neighborhood to working through work politics. And then when sex did happen, it was so much more.

Sneaking in sessions on the couch when my son was fast asleep on our bed, making love without making a noise, taking a weekend to stay in a hotel all day: they've been some of the hottest love sessions I have ever had in my life. And each time, because it was building upon such limited alone moments, it felt so much more gentle and lovely. Often I’d hold back all the emotions of my day, as so many mothers do with their babies, and then release while I was in my husband’s arms. It was love-making on a whole other level.

Motherhood shakes up a lot of how you see your body and your marriage. But I never expected it would make me love both so much more.