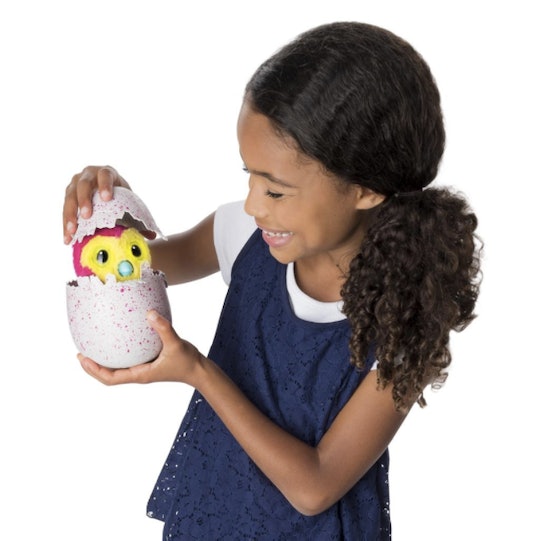 Keep An Eye Out For Post-Christmas Hatchimal Sales

Hatchimals: This holiday season, they either made you feel like the most successful shopper ever at the toy store if you snagged one, or they filled you with everlasting rage and frustration if you didn't. In fact, demand was so high that Hatchimals' creator company, Spin Master, reportedly increased production by hundreds of thousands of units to try and meet expectations, and during the madness of the holidays, the Hatchimals website promised that "a whole new batch of Hatchimals will be ready to hatch in early 2017." However, are Hatchimals sales after Christmas going to keep going wild, or will they slow down (finally, please)?

Luckily for parents who would like to get their hands on the Furby-like craze of 2016, Hatchimals sales are certain to slow down after Christmas — for several reasons. First of all, the automatic deadline of a huge holiday is over, and parents can now stash their competitive "I only have seven hours left before Christmas and need a Hatchimal" spirit away. Once that deadline is gone, Hatchimals should become more plentiful in stores again and people will start to pay regular prices for them (forget you, eBay opportunists), leading sales to drop back to more normal levels.

"It’s a hit-driven industry and this is an expensive item, which really tend to sell only at holiday time," Gerrick Johnson, an equity research analyst, told The New York Times earlier this month.

Another thing that may lead to a drop in sales for Hatchimals? The, um, rather disappointing experiences a few parents have had with their kids' new toys. According to Business Insider, many purchased Hatchimals refused to hatch or malfunctioned soon after emerging from their shells. Angry parents left dozens of comments on Spin Master's Facebook page, and customers reported waiting close to two hours for customer service when phoning the company.

A post issued by the company on Spin Master's Facebook page read: "While the vast majority of children have had a magical experience with Hatchimals, we have also heard from consumers who have encountered challenges. We are 100% committed to bringing the magic of Hatchimals to all of our consumers."

Those who promised their children belated Hatchimals or are planning to buy some for upcoming birthdays, however, can rejoice. With production levels pumped up and more toys expected after the holidays, parents will likely be able to find Hatchimals both more cheaply and more easily than parents who joined the shopping frenzy before Christmas.