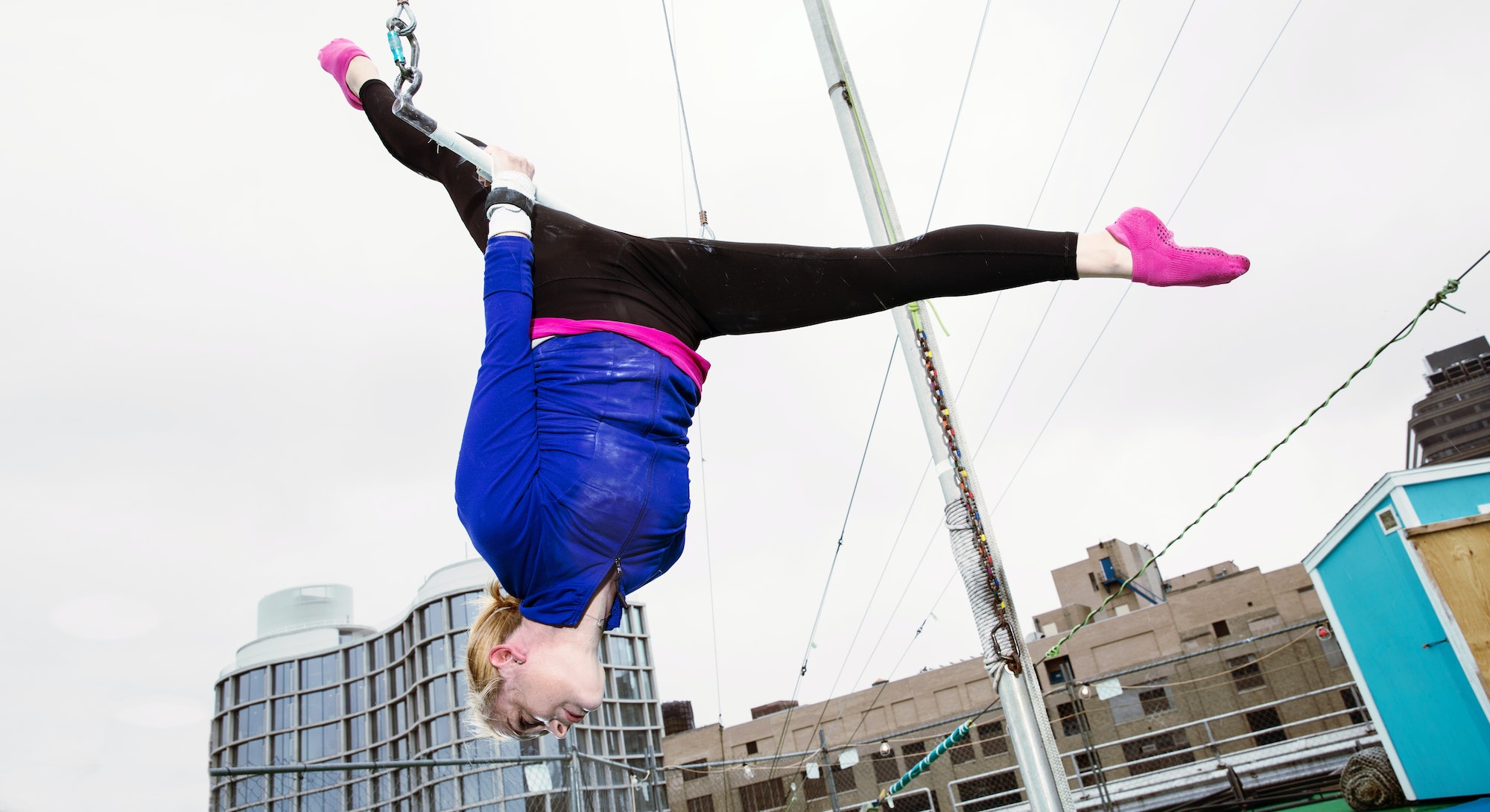 After Her First Baby, This Mom Re-learned How To Fly

Laura Valpey has always identified as a thrill seeker — so the first time she stepped off the 23-foot platform, swinging from a horizontal bar tethered by two metal ropes, she wasn't even scared. As she puts it, "it was an adrenaline rush." Becoming a professional trapeze artist wasn't necessarily on Valpey's radar that crisp spring day in 2006, but the experience resonated with something deep inside her: She felt strong. And that was intoxicating. (After all, the Trapeze School New York's motto is "Forget fear. Worry about the addiction.")

Twelve years of intensive trapeze training, a marriage, exacting fertility treatments, and two kids later, Valpey is still very much obsessed with the idea of strength — her definition of the word, however, has evolved... although that part wasn't easy.

Feeling comfortable enough to call herself strong again — after years of trying to conceive, getting pregnant, having two babies, and months of arduous training to get back on the trapeze again — was a long process. It felt like the body she spent countless hours a day cultivating no longer entirely belonged to her. "I just felt so disconnected from my body. It wasn't like 'Oh I haven't done this in a while,'" Valpey says of getting back to training two and a half months after her son was born. "It was like 'Oh my God, I literally cannot lift my legs up."

But, as Valpey has learned repeatedly throughout the past 12 years, strength isn't only measured by the number of straddle whips you can do or how many double somersaults you can complete; its definition is much deeper. And her personal journey — physical, emotional, and mental — to redefine what being strong means after motherhood has been one of the greatest tests of strength she's ever faced.

Valpey's focus on her body began when she was a kid; she was an athlete, doing gymnastics and practicing dance. She had a flair for performance — that's why she uprooted herself after college graduation from her Seattle, Washington, hometown in August 2000 to settle in New York City. She was "bitten by the theater bug" and that love of acting led her to join a theater company where she ended up meeting her future husband ("the hubs") in January 2001. (Editor's Note: IN FIVE MONTHS?) She wasn't out looking for love, and certainly not marriage, but "life happens" is a sentiment Valpey echoes a few times.

I wasn't always dreaming of being a mom and having kids, but when it was seeming like it might never happen, I had to deal with entertaining the possibility that I couldn't.

They talked about having kids, but it was always "at some point" and something they "should do eventually." And that was fair as Valpey still had ambitions she wanted to pursue. That drive is what brought her atop the 23-foot high platform that day in 2006, and what kept her going back. Taking intensive flying courses, spending full days training, learning and perfecting difficult tricks, and eventually performing in shows. She got so good at what she was still calling a hobby, she finally thought to herself, Maybe I should get paid for this... And so she became a part-time instructor in 2009, teaching classes during the day and training at night. A good portion of Valpey's life revolved around the trapeze, spending sometimes days on end in the gym — and she loved it. She had a job, a space to train constantly (and for free), and a happy marriage. She felt fulfilled.

It was around 2011 when she and her husband finally reached that "some point" and started talking about making their family bigger. But trying to conceive proved to be more difficult than they could have imagined, "It was crazy because I wasn't always dreaming of being a mom and having kids, but when it was seeming like it might never happen, I had to deal with entertaining the possibility that I couldn't." It was one of the first times (of many) she dealt with that disconnected feeling from her body — like she wasn't entirely in control of it.

Patience was a strength she had to learn.

"There's nothing quite like a crowded fertility clinic at 7 a.m. to kill the romance of baby making and make you feel like an alien abductee who has to pay for their own probing," Valpey shares. "I had to get used to my body being up for discussion. And up for invasion." For someone who dedicates her life to being in control of her body, the process felt disempowering. Emotionally, the constant oscillation between hope and despair was hard to bear — like a loop she couldn't escape. Valpey was used to progress; she was used to putting in hours and seeing a return. Patience was a strength she had to learn.

It took more than two years, a host of doctors visits, and two rounds of IUI (more commonly known as artificial insemination), but the painstaking efforts paid off and she found out she was pregnant in the winter of 2013 — news that elicited both excitement and trepidation. Now that it was a reality, the concept of balancing motherhood with a time-consuming career that completely depended on her body was something she couldn't train for. Nevertheless Valpey was determined to do both to the best of her ability. Although she stopped training on the trapeze around two months into her pregnancy, she was still very focused on staying strong. She continued to work out, hoping to eliminate the down time between giving birth and getting back on the trapeze.

However, it's often the most carefully laid plans that unravel the quickest. In August 2014, Valpey went into labor at home, where she hoped to have an unmedicated birth, but after laboring for 36 hours, she was rushed to the hospital where the doctors performed a C-section to deliver her 9-pound-1-ounce son (for a sum total of 48 hours in labor) — an operation that would certainly complicate and postpone Valpey's return to the trapeze.

Two and a half months after the birth of her son, Valpey climbed back onto the platform for the first time. Having focused hard on keeping in good physical condition throughout the pregnancy, she wanted the work to pay off. The result was defeating, "Oof, that was rough... It was such a strange feeling. I would try to just push a little harder, give a little more umph, but I just couldn't get parts of my body to engage." For someone whose passion, whose job, depended so much on her physicality, the postpartum toll was crushing. And, of course, Valpey's free time to practice and train was limited with a newborn in the house.

Valpey was obviously ecstatic to give birth to a beautiful and healthy baby, but feeling at odds with her body was difficult to handle. She could never have anticipated the level to which her pregnancy would force her to re-learn her strength, but the process (as she sees now) only made her stronger. Over time, "it got better and better." Training became a little easier to manage as her son got older and within about two years, she was back to her old tricks again. She booked a performance with her fly team in and she was finally back in the mix, but it was directly after the show when she found out she was pregnant again. This one was "a surpriiiiiiiiiiiise," Valpey emphasizes. It also happened to be right around the time she and her husband decided "nope, we're good with one kid." And that's where she comes in with her "life happens" mantra.

'I could tell I wasn't as strong as I used to be, but I also didn't feel like I was going to crumble and fall apart.'

Valpey's daughter was born in August 2017 by C-section. This go around, the two-time mom handled her recovery differently. She didn't try to jump right back on the horse; she focused on nailing the basics and building up strength from the ground up. She didn't get back onto the trapeze until she was sure she could handle the result, about four months after her daughter was born, "I was so nervous getting back up there thinking it was going to feel like it did that first time... but it was not that bad. Obviously, I could tell I wasn't as strong as I used to be, but I also didn't feel like I was going to crumble and fall apart." And that mental fortitude is as important as any physical achievement. Although Valpey maintains she has "yet to feel as strong as [she] did pre-pregnancy," it's clear to see that balancing so many important things along with trapeze in her life has taught her to laugh about it.

The past 12 years have had their share of ups and downs for Valpey, but they've shown her so much about what she's capable of. They've made her re-imagine her own definition of strength. "For me, it's a combination of physical ability and willpower. One without the other will only get you so far. But if you really dig deep, for either one, when you really need it, you just might surprise yourself." And Valpey continues to surprise herself over and over and over again. As for right now, Valpey's back on the trapeze, swinging herself to a new level of strength every single day.