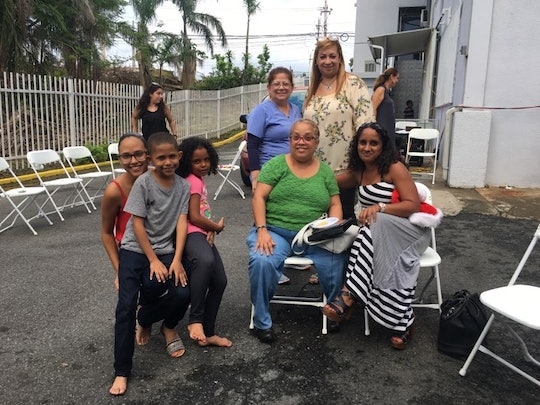 Lillian Barnes lives up in the mountains of Puerto Rico with her 13 children in a town called Utuado, where she is still without electricity or running water. This year, Christmas trees being scarce on the island, she decorated three tips of trees, and assembled them into a sort of table arrangement. "We call it our 'Charlie Brown Tree,' which makes it all the more special," she tells me. "We keep our hopes up looking towards the New Year." In the meantime, her daily challenges include keeping their diesel generator running, "hunting for diesel fuel, and checking our water box that collects water from the mountain." For Barnes and 3.4 million of our countrymen, Christmas in Puerto Rico will be very different this year.

Roads are still closed, food is still unreliable, running water is undrinkable, and, the week before Christmas, we have found that there are no Christmas trees.

We Puerto Ricans did everything we thought we needed to do ahead of Hurricane María. We bought water, canned food, candles, batteries. But we were not ready for the aftermath. It doesn’t matter how many times Puerto Rican weather forecaster Ada Monzón told us that this would be the worst hurricane since Hurricane San Felipe in 1928, we could have never imagined what that truly meant. On September 20, Hurricane María made landfall on Puerto Rico as a category 4 storm, tearing palm trees out of the ground, ripping up power lines, and dumping 30 inches of rain on the island. The next day, President Trump declared Puerto Rico "obliterated," then traveled to his New Jersey golf club. Trump administration officials did not visit the island to see the damage until five days after landfall. Hurricane María killed as many as 1,052 people, per the New York Times — most of them in the storm's aftermath — and has left as much as 36 percent of the population without power a week out from Christmas.

It has upset the lives of virtually everyone on the island. Ana Puig-Rivera lives with her husband and son in Arecibo, the largest municipal area in Puerto Rico, where power was restored six weeks after the storm — early, relatively speaking — but still drops out for days at a time. She held off putting up her Christmas tree because she was worried that plugging in the lights might blow the power grid. When she finally decorated it this week, her 16-year-old son asked her, "Why did you bother to put it up?" He is grateful to have a house, she says — some of his friends lost theirs — and feels there is no cause for celebration.

Puig-Rivera's friend with young children, on the other hand, stood in line for hours to get a tree. "She wanted to give her kids some normalcy," she says, adding, "for little kids [this Christmas] is going to be a hard one." She explains that her own son is old enough to know Santa isn't real, and therefore "feels like most Puerto Ricans."

What feeling is that? "Grief," she says.

On an island known for its spirit, the mood is subdued.

Roads are still closed, food is still unreliable, running water is undrinkable, cell service is shaky, roofs remain in tatters, and, the week before Christmas, there are no Christmas trees. Puig-Rivera tried to order her gifts online and says that while some packages arrived, others didn't. She had to tell her son, "What I got you for Christmas won't be here."

Family lives have changed, even for those with some means. ‌Deborah Román is a mother of two who lives in Hato Rey. Following the storm, she sent her oldest son to a university in California instead of in Puerto Rico, where the future is uncertain. Hundreds of college students have sought placements at mainland universities following the storm, and somewhere between 17,250 and 32,721 Puerto Ricans aged 18-24 are expected to leave in the year following María, according to the Center for Puerto Rican Studies at City University of New York’s Hunter College — well above the usual 9,700 per year.

The Román family is still without power, 93 days on from the hurricane, and won't be spending Christmas together in Puerto Rico.

"I miss my son, but I know he is better off," Román tells Romper. "My young one is still in elementary school and even though classes stared soon after María, it was so hard on all the kids because the school had no electricity. My son started to develop a rash because of the heat." She adds, "I have not been able to purchase a tree nor toys, everything is scarce on the Island."

It's a refrain I have heard a lot. No toys, no Christmas trees, and no supplies. When the hurricane hit on September 19, I was in Guaynabo, where I lived with my two girls, ages 8 and 9. After the winds died down and the water receded, life was chaotic. I distinctly remember the lines for everything: gas, diesel, food.

We all found ourselves in a scramble to survive. I was lucky enough to get a little gas burner so I could at least boil eggs and make my little girls a warm breakfast in the mornings. In order to accomplish that I had to get up at 6 a.m. to get to the supermarket before it opened at 7 a.m. to a long line of shoppers. At the time, the governor had told CBS that there were shipping containers filled with aid sitting on the docks, held by FEMA; a charge widely reported, but one FEMA disputed. Needless to say, going to the supermarket and trying to buy the basics was a challenge. The lines for gasoline were like a scene from an apocalyptic movie, and we all knew that simply getting on line, often no less than 400 cars deep, did not guarantee that, once it was your turn, there would be any gas left.

Then came horror stories of families trapped in their neighborhoods, running out of food and water because the access road was destroyed. A FEMA worker, who asked not to be named to protect their job, told Romper, "María has shed a cruel light on the true living conditions of many affected. It is heart-wrenching to see how the devastation is still so palpable in the central part of the island."

"Some people didn't get their power on after Irma," says Puig-Rivera of those who have already gone more than 100 days without power. The entire scene feels like a movie to her. She told me in disbelief, "We think we are a first-world country."

Because of María this year we have absent members, some that are left the Island and others are still trapped in their homes.

For Mónica Quiñones, the devastation means that some family members won't make it to Christmas, walled off by destroyed roads in other towns. A mother of two boys, Quiñones lives in Ponce, and says the only presents the family could buy were purchased online or sent by mainland family members.

"We were not able to find a tree so this year we bought a fake one," she says, "We are still without power, and communication is still unreliable." The inability to find gifts isn't the biggest concern, she says, but finding the family scattered will change the feel of the holiday.

“Our Christmas is always celebrated around family. We like to spend quality time with them and enjoy each other's company, but because of María this year, we have absent members, some that are left the island and others [who] are still trapped in their homes because access to them is still blocked three months after the storm."

It has been impossible to get gifts on the Island. Shelves are empty and stores like Walmart and Toys R Us have no toys at all.

Locals recently protested after the government missed its declared deadline to restore 95 percent of power; ABC news reported that just 64 percent of power was back on at December 15. Traffic is chaotic because traffic lights are not working, in some areas because there is still no power and in other areas because there are simply no traffic lights. María took many of those with her. María took jobs, homes, and businesses. My digital marketing business of 12 years vanished in 48 hours. So I moved to Clermont, Florida. For many of us, staying was just not an option.

From beyond the island, the diaspora has activated. The almost unfathomable silence from the federal government, and slow rate of repair locally, spurred corporations and pop-up non-profits step into the breach.

Water filtration systems, 'like you would see in a third-world country,' top the list, followed by batteries.

Margarita Mendoza, who lives in Chappaqua, New York, created Adopt A Family In PR, after the need for care packages ballooned beyond her family. The organization is now run by volunteers and has connected individual donor families to over a thousand Puerto Rican families. The donors and recipients exchange letters, discuss the goods the recipients need, and send packages directly. Water filtration systems, "like you would see in a third-world country," says Mendoza, top the list, followed by batteries. After that, solar-powered technology, and coffee. "They can't afford to spend money on coffee," she explains.

Adopt A Family has also connected donors to several orphanages and animal rescues, and organized gift deliveries ahead of Christmas Day and Three Kings Day, January 6, the official end of the Puerto Rican holiday season.

The need for goods goes beyond household supplies to medication refills, and the ramifications of a contaminated drinking water and a lack of running water run to human scabies, conjunctivitis, and gastrointestinal issues in children. Ricardo Vasquez Duarte is a physician in Miami, Florida, who joined a mission three weeks after the storm to tour the island and offer medical treatment and consultations.

Duarte was born and bred in Puerto Rico and found the sight from his plane shocking. Once on the ground, he "went house by house" with his team to tell people, "If you need any help we are here." Communications were down, he said, three weeks after the storm, so they made do with a satellite phone and door-knocking. On one occasion, the road was unpassable, so they left the car and hiked down into the town with their supplies. The most common need was refills for medication to handle chronic conditions like hypertension and diabetes, but he also saw a lot of post-traumatic stress disorder.

Duarte wants to go back and help, and worries that the recovery will be slow. "Those rural areas are going to need a lot of help — not just medical," he says.

In the meantime, Christmas is upon us and those that have kids must carry on, because one thing Puerto Ricans get right is Christmas. The food, the music, the parties, all of it.‌ Puerto Ricans like to use the hashtag #ilivewhereyouvacation to brag. That sentiment used to feel true, because the Island was breathtaking. And I know it will be again.

"Sometimes you think it's Christmas," says Puig-Rivera, "but you look through your window and see the devastation."

To help Puerto Ricans, you can send packages directly to families through Adopt A Family In PR; make a donation to the One American Appeal, ConPRmetidos' Puerto Rican Real-Time Recovery Fund, or LifeStraw’s Safe Water Fund; or provide legal assistance to locals making claims on FEMA through AyudaPR.org.