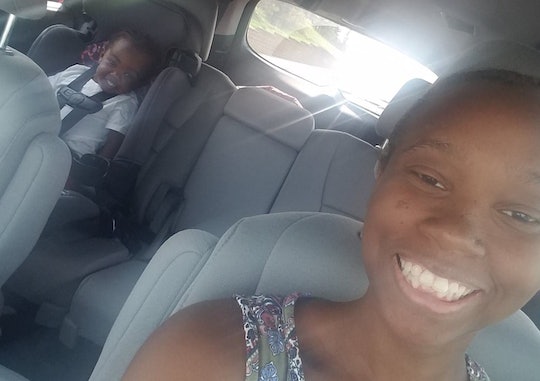 Ambreia has a 2-year-old son and has been trying for a second child for a year and a half. This is the sixth installment of her Trying diary. You can read the previous entry here.

Getting pregnant after trying for so long should have felt amazing, right?But it was super hard trying to juggle the demands of life while my husband was gone for work, and I was physically sick and depressed. I spent a good amount of time in shock that I made it to 20 weeks. I know it's silly, but I kinda expected something to go wrong because I wasn't as grateful as I should have been in the beginning. I'm smart enough to know perinatal depression wasn't my fault, therefore it shouldn't be punishable, but sometimes you can't stop irrational things from coming to mind, ya know.

I kicked my efforts toward being holistically healthy into high gear this month. I did my best to eat better and walk at least three to four days a week. For a good number of those days, I kicked ass by walking, and eating fruits and vegetables throughout the day. But some of those other days weren't so great. I spiral into guilt over the smallest morsel of junk food. The way I have interacted with food over these last few months has been pretty frustrating. I overcomplicate things, and end up stressing and driving myself nuts.

That was the hardest part about this past month — guilt-tripping myself about what I'm eating. I had to work really hard not to internalize those messages because I feel like it's leading me to a path of having a very negative relationship with food.

This month was also really hard regarding body image. I feel like a whale, and it doesn't help that my thighs are looking a lot more mermaidish these days. When you add that to the comments from random people about me being too big or too small, it's a clusterf*** of feelings.

Thankfully, one of my friends is pregnant also, and although our lives are very different, she understands a lot of what I'm going through. We really do try to keep each other grounded. Plus I do my best to remind myself that all of the hardships I've gone through emotionally and physically over the last few months will all be worth it in when the baby comes.

This month was also the big reveal that everyone was waiting for. At the last minute during my 20-week appointment, I decided that I did want to know the baby's gender. Before we went to the appointment, my husband and I wrote down our guesses. The winner of the bet would get to choose the baby's take-home outfit. My husband was right — at our 20-week appointment, we found out we are having a little girl!

Finding out I'm having a girl came with a mix of emotions.

I am still in disbelief. I never thought I would have the opportunity to be the mother of a daughter. Although my husband generally has a neutral disposition, he admitted he was pretty excited about having a girl and that that it was what he was hoping for.

I'm willing to bet that by the time my labor rolls around, hubs will have forgotten that he is supposed to be choosing her take-home outfit, since he won the bet. But then again, as excited as he seemed maybe he won't.

Finding out I'm having a girl came with a mix of emotions. Over the last two years, I've been "a boy mom," and now that's gonna shift some. Naturally, I think about things like, who will she look like, how will her voice sound, and will she accomplish big things in the world?

But I also have a little anxiety about having to prepare her for dealing with racism and sexism, one day. It might seem early to be worrying about these things, but Black parents start thinking about how our children will be impacted by racism long before they get here.

On a happier note, we're pretty sure we know what we're going to name her, though we're only telling family at this point. The middle name situation, however, is a different story. I am more concerned with finding a solid nickname than a middle name. Our son has five of them, and she’ll have to catch up. There are two months sitting in between me and my next ultrasound. Until then, I'll just be waiting and enjoying the kicks along the way.

More Like This
Searching For Home As A Lifelong Renter
Home Reno Culture Makes Me Feel Like I Live In A "Before" House
I’m Getting Dual Citizenship For My Jewish Children, Just In Case.
Can You Breastfeed After A Breast Lift? Experts Explain