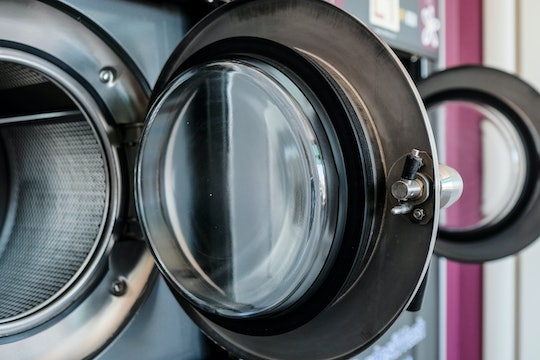 Children need to be aware of the dangers of all household appliances because potential hazards like ovens, for instance, aren't the only items that can cause harm. And after a toddler died in a front-loading washing machine on Aug. 4, police are issuing a very important warning to parents about the potential risks associated with this household appliance.

Earlier this week, a 3-year-old boy in Orlando, Florida, died after getting trapped in a front-loading washing machine, according to the Orlando Sentinel. The boy had reportedly been playing with a sibling in his family's laundry room when he climbed in the washing machine and accidentally trapped himself inside. Firefighters reportedly performed CPR on the boy and took him to a nearby hospital where he was later pronounced dead, according to the Orlando Sentinel.

It's unclear exactly what happened or how long the toddler was trapped inside of the machine, but police believe that when the machine's door closed, it "created an airtight seal inside the drum of the washing machine," according to TODAY.

A representative for the Orlando Police Department has yet to respond to Romper's request for comment, but Orlando Police Department public information officer, Cory Burkarth, did speak to TODAY about the incident. "We are currently investigating this tragic death as an accidental death," Burkarth explained. "...While inside the drum of the washing machine, we believe the child may have died due to a lack of oxygen."

As authorities conduct an investigation into what happened, police are urging parents to keep their laundry rooms locked and to keep their washer and dryers closed to prevent potential accidents.

Additionally, the police want parents to talk with their kids about the dangers of playing with household appliances. "We also ask that parents speak with their children and teach them that washers, dryers, and other appliances are not toys and should not be played with," Burkarth explained, according to Inside Edition.

"No family should have to experience what this family is currently going through ... ," he added.

Parents aren't the only people who should pay attention to this warning — in fact, anyone who has children over to their house should know about the possible dangers associated with their washing machine and dryer. Burkarth advised parents to speak to babysitters and other family members about this important issue.

There are a few safety measures that parents can employ when it comes to their laundry room. Most washing machines come with a "lock out" feature, according to Consumer Reports, and parents can put on a child proof safety lock (like they would with their kitchen cabinets) to ensure that no one can get inside. Using child locks can also prevent household pets from getting trapped inside of the washing machine.

But most importantly, parents can establish the laundry room as off- limits. "The job of a child between the ages of 1 and 4 is to explore and to find out how the world works," Ben Hoffman, a pediatrician in Oregon and the chair of the American Academy of Pediatrics' Council on Injury, Violence, and Poison Prevention told Consumer Reports.

"We can't hazard-proof kids, so we need to be as careful as we can in identifying hazards and protecting them," Hoffman added.

The Consumer Product Safety Commission estimates that there have been 3,000 emergency room treated washer associated injuries among children 5 and younger since 2014. One mother wrote in a viral Facebook post last year that her 3-year-old daughter got trapped in the washing machine but was able to get her out before it started filling up.

Simply put, education is key here. Parents should consider educating their children about the potential dangers associated with washing machines and take precautions to ensure their laundry rooms are secure.

More Like This
Over 10,000 Sippy Cups & Bottles For Toddlers Recalled Due To Lead Poisoning Hazard
Here’s Why Toddlers Sometimes Cry So Hard They Throw Up
Why Do Toddlers Line Up Toys? Experts Explain This Classic Toddler Behavior
Why Do Toddlers Throw Themselves On The Ground During Tantrums? They Have Their Reasons