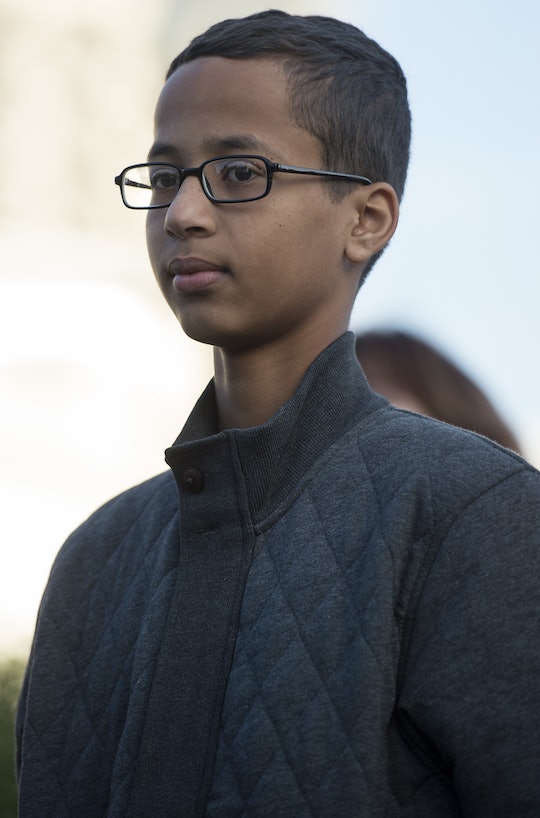 Lawyers for the Texas teen arrested after he brought a homemade clock to school in September are taking action. Tuesday the attorneys reportedly announced that the family of Ahmed Mohamed is demanding $15 million in damages and an apology over the incident. The 14-year-old Muslim high school student was arrested and suspended from school when a teacher allegedly claimed the homemade clock Mohamed had brought to class was actually a bomb. The story caused headlines worldwide as people rallied around the teen using the hashtag #IStandWithAhmed and used it to call attention to a rising tide of Islamophobia. In a statement sent to Romper, the school district acknowledged they’d received the letter from Mohamed’s attorneys but declined to comment further:

Irving ISD is in receipt of a letter from the Laney & Bollinger law firm. Our attorneys will review the information and respond as appropriate, as with any legal matter.

CBS reported that in letters from Mohamed’s attorneys to the city of Irving and the Irving Independent School District, the family described what they allege happened to Mohamed during his arrest and questioning, claiming that the local school officials and the mayor’s office sought to smear the teen in the media in order to cover up their alleged illegal actions in the case. The letters allege that Mohamed was targeted by local authorities looking to use the teen to whip up Anti-Muslim sentiments. In the letter to the city, the family claims that in an interview with Glenn Beck, Irving Mayor Beth Van Duyne painted the teen as a jihadist who orchestrated his own arrest in order to support a “civilization jihad” in Irving. Romper also contacted Van Duyne's office for comment Tuesday but did not immediately hear back.

“Mayor Beth Van Duyne lied about Ahmed and his family, and she did it to an audience that is on the absolute fringe of American life,” alleged Mohamed attorney Kelly Hollingsworth in one of the letters. “Van Duyne irreparably endangered the safety of the Ahmed [sic] family.” Following the incident, Mohamed's family claimed that he was targeted by anti-Muslim conspiracy theorists. As a result, they claim, the Mohameds were forced to move to Doha, Qatar to ensure the boy’s safety.

According to the letters, the family is asking the City of Irving to pay $10 million in damages and for local school officials to pay another $5 million — along with letters of apology to the Mohamed family from the mayor, the chief of police, and from school officials — to avoid a possible civil lawsuit, the attorneys said.

Hollingsworth argues that the amount is fair based on what he claims happened to the family following the incident. The letters describe the alleged aftermath of Mohamed’s arrest, including blog posts where the teen’s face was allegedly superimposed on Osama Bin Laden’s body and death threats the family claims were made against them. “Ahmed will now forever be associated with bomb making wholly without basis,” added Hollingsworth, in his defense of the sum the Mohameds are demanding. He claimed that the teen's reputation is "permanently scarred" from the incident.

But in a phone call with Romper Tuesday, Hollingsworth claimed the apology is an equally important piece:

The apologies and retractions are needed because [the Mohameds] feel like if they had that, they might be able to go back to their home. That’s part of being able to get back home for them.

The parents are first generation immigrants, and they hit the shores of the U.S. and did everything the U.S. would want: they built businesses — multiple businesses — they purchased a home in the suburbs, they put their kids in public schools and raised good kids. They are the embodiment of the American dream.