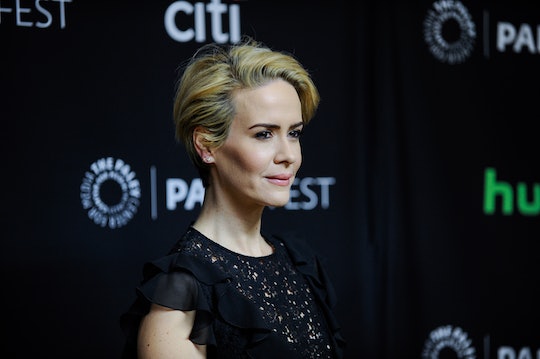 'AHS: My Roanoke Nightmare' Theories That Could Explain The Bizarre Premiere

The Season 6 premiere of American Horror Story: My Roanoke Nightmare didn't provide as many answers as one might have expected. After months of misleading promos and scraping by with barely a spoiler in sight, anyone would have expected the actual first episode to finally reveal what course the season will take. Instead, however, audiences were treated to a show within a show, a mockumentary about strange and unsettling occurrences in a beautiful old house on what was once Roanoke island. It was an unusual premiere that definitely amped up the excitement for the season, but what does it all mean? These 6 AHS: My Roanoke Nightmare Season 6 theories could explain just what was happening in the premiere.

It's unclear at this point whether the rest of the season will follow the same format, exploring the story of Shelby and Matt's nightmare on Roanoke for ten episodes with a faux documentary as the framing device. The shortened season could lend itself well to a departure from the norm for the season, and perhaps also result in some tightened storytelling. However, it's also possible that AHS will explore numerous different stories this year, though the promo for the second episode indicates that Shelby and Matt's story is continuing for now, at least. There are a lot of possibilities for Season 6 even now that it's begun, but that's usually how it goes with AHS.

One popular theory is that AHS will focus on different bizarre stories week to week, much like The Twilight Zone did. If My Roanoke Nightmare is a true crime, real hauntings kind of show like those that can often be found on TV, then it may explore many different characters' nightmare experiences in Roanoke. However, scenes from the second episode throw this theory out. We are not yet done with Shelby and Matt.

The Focus Will Shift To The Actors

One very interesting theory posits that the focus will shift throughout the season. It can be difficult to remember, but Lily Rabe and André Holland are the real Shelby and Matt; Sarah Paulson and Cuba Gooding, Jr. are merely actors playing them for a show. We're not seeing events as they happen, but rather getting a produced version after the fact. Some fans seem to think that the actors are filming at the actual house Shelby and Matt lived in, and as the season goes on the production of the faux documentary will be interrupted by more odd happenings behind-the-scenes. AHS may turn meta, focusing on the actors as things go wrong instead of just telling Shelby and Matt's story.

All The Promos Were True

Though fans were told that one or two of the many, many promos for Season 6 were true, it seems like it might actually be the opposite: all of them are. Many moments in the premiere felt as though they referenced things from promos: the hail of human teeth harkened back to the teeth mobile; there were also creepy figures in the dark, a lonesome house, and references to pigs.

AHS has dealt with aliens before, in Season 2's Asylum, but it's one possible theory about what happened to the missing Roanoke colony that seems to have partially inspired this season. A settlement of Puritans in Roanoke up and disappeared; perhaps they were abducted? Alien-esque creatures played into a few of the Season 6 promos, and an article on the Thrillist found Episode 1's characters reminiscent of a real life interracial couple who claimed to be abducted in the 60s.

Roanoke Is Full Of Angry Ghosts

This is one theory put forth by the show itself way back in Season 1 when psychic Billie Dead Howard (played by Sarah Paulson) spoke about the Roanoke colony at length. In her monologue, she mentioned the sudden death of all the colonists resulting in a group of seriously angry ghosts who tormented the Native Americans of the area until they were banished with a word: Croatoan, the same thing found carved in a tree at the settlement site. Angry, tormenting ghosts sounds pretty accurate to what's going on during Season 6 right now, so perhaps those settlers aren't as banished as one might have thought.

Billie Dean reappeared at the end of AHS: Hotel as the host of a show about hauntings who came to the Cortez for an episode. It's possible that My Roanoke Nightmare is Billie's show even though she's been absent from it so far (in a manner of speaking). The shows share similar styles, and it wouldn't be the first time Sarah Paulson appeared as two different characters in one season. Then again, perhaps Billie Dean is playing Shelby; they do have pretty similar hair, and Paulson isn't the real Shelby, after all.

If nothing else, it's pretty impressive that a show in its sixth season is still providing this many surprises.