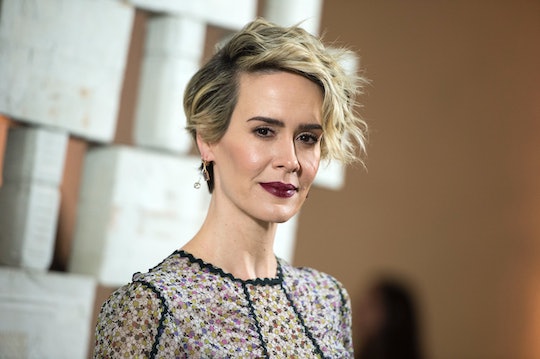 'AHS: Roanoke' Episode 6 Theories That Try To Figure Out The Rest Of The Season

American Horror Story changed it up for Season 6, and the entire season so far has been different than the seasons that preceded it. Not when it comes to scares or silly character decisions – those are all par for the course at this point. There are the same detailed flashbacks, gore extravaganzas, and Sarah Paulson screams to give Season 6 a familiar feeling, but the wildly different format has been keeping audiences on edge as they wait to see what happens next. Episode 5 was another surprise, seeming to tie up the story five episodes before the season's end. However, all that means is that there's a huge twist about to happen – and these AHS: Roanoke Episode 6 theories might shed a little light on what that twist might mean for the show.

Instead of the usual narrative viewers had come to expect, AHS spent the first half of its sixth season playing out a mockumentary called My Roanoke Nightmare that told the story of a family being tormented by murderous ghosts in their brand new home. At the end of Episode 5 they finally escaped and appear to be free and happy (if broke, and suffering some serious PTSD), but that doesn't mean the story is truly over. "You'll see starting in Episode 6, the show has a huge turn and the thing that you think you're watching is not what you're watching," series creator Ryan Murphy told Entertainment Weekly. "It's a hat on a hat on a hat on a hat that we've had to protect." But what could that huge turn be?

It Was All A Hoax

Many fans have noticed that Season 6 is very similar not only to other seasons of the show, but to many classic horror tropes. While this isn't out of character for AHS – the series often borrows generously from popular horror films – it does seem suspicious when framed as Matt and Shelby's story. It almost seems like they're lying. As stated by Reddit user JiveMurloc, "It's like they took a bunch of popular horror story characters and tossed them in a blender and made up a fake haunted house story."

But why would Matt, Shelby, and Lee need to lie? This theory posits that they came up with the story of the haunting to cover up murders they committed in the house. It all starts with Lee's ex-husband's death; they would have motive to kill him because he hit Lee and because he was trying to take Flora away from her. The murder might have even been an accident. However, after witnessing the crime it's possible Flora ran away and went missing, and then when Cricket showed up and discovered the truth, he had to be done away with too. It would certainly be a twist to find out everything we'd been watching for five episodes was a total lie, and that fits in with Murphy's statement too.

They Made A Deal With The Ghosts

Episode 5 revealed that the hillbilly Polk family made a deal with the Roanoke ghosts to deliver victims for sacrifice so that they themselves would be spared. What if Matt, Shelby, and Lee made the same deal? In that case, My Roanoke Nightmare would be a ploy on their part to lure victims – namely, the cast and crew – to the house so that the ghosts could slaughter them. That's one way to lock down your real estate deal.

It's All About Nostalgia

AHS: Roanoke seems to be making a lot of callbacks to its previous seasons, even more than the usual small details that link each season together. This might be on purpose: the show could be reliving its past history before it finally dives into something new. In that case, the first five episodes of Season 6 would each reference the first five seasons – and they would specifically reference Episode 6 of each season. It's all about the sixes this year.

Episode 1 makes a clear allusion to Murder House when a married couple buys a house with a dark history in an attempt to start over. Episode 2 featured medical-themed murders a la Asylum. Episode 3 was all about a seance, and even saw the return of a Coven cast member. Episode 4 revealed a connection to the Mott family from Freak Show and Episode 5 ended in a Hotel. But it gets even deeper than that.

Episode 1 of Roanoke also referenced Piggy Man, who had previously been introduced in Season 1, Episode 6, "Piggy Piggy." Season 2, Episode 6 featured a creepy little girl who lured away playmates to their death, much like ghostly Priscilla tried to do to Flora in Episode 2 of Roanoke. The corresponding episode of Coven dealt with awakening evil spirits via a Ouija board – just like Roanoke's Episode 3 seance. Freak Show and Roanoke both dipped into Mott family history in their sixth and fourth episodes, respectively. Episode 6 of Hotel involved a failed attempt to murder some children, which was the very thing that allowed the family to escape their house in Roanoke Episode 5.

If the show really is honoring its past, then that might mean the upcoming sixth episode of the sixth season will be something no one saw coming.