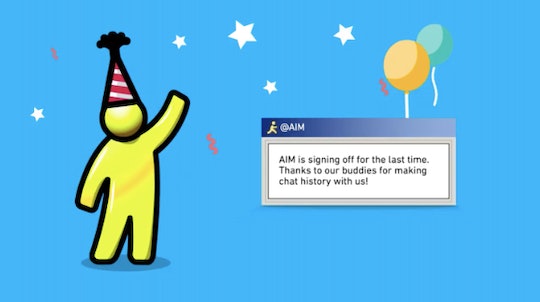 AIM Is Officially Ending This Year, & People Have *SeRi0u$ Feelings* About It

Nothing gold can stay, and AOL Instant Messenger is no exception. "What's that?" you may be thinking. "AIM is still a thing?" Turns out that the beloved messaging service that defined so many adolescences has managed to hang around the internet through the ascendancy of Gchat and Twitter. It won't be around for much longer, though — AIM is officially ending this year, and it deserves a tribute.

Nineties kids everywhere may have sensed a disturbance in the Force on Friday, when Michael Albers, the VP of Communications Product at Oath (the new name of AIM's parent company), announced on Tumblr that AIM's final shutdown will happen on Dec. 15, 2017. In a post titled "Our Yellow Running Man Is Ready To Retire," Albers wrote,

AIM tapped into new digital technologies and ignited a cultural shift, but the way in which we communicate with each other has profoundly changed.

Looking at the current internet landscape, and all the social media chatting options that people love now, it makes total sense that the Yellow Running Man is ready to buy a condo in Florida and take up water aerobics. But I'd like to send him on his way with a few fond (or ambivalent) memories for all that he gave me and so many of my generation.

For a whole swath of kids who came of age in the '90s and early 2000s, AIM provided a first stab at self-definition, through the selection of the all-important screen name. How would you choose to present yourself to the world? How could you capture the ineffable nature of your soul, while still appearing cool and fun to middle school boys and girls? I considered something related to musical theater, my one true passion at the time, but realized that ILoveShowtunesRadio was maybe not the best option for impressing people. Dragonflies were pretty, but basically every screen name related to dragonflies was already taken by some other preteen girl out there.

I was the lamest person on the planet, I thought, but if I chose the right screen name, maybe, just maybe, I could throw people off the scent of my deep repulsiveness. I agonized and agonized, and then settled for copying my best friend's foolproof formula of [initials] + the word "girl" + [random numbers]. Hence LAHgirl00 was born.

And oh, LAHgirl00 had some good times. There was the chat where a boy I had a crush on wrote "BRB" and I, not knowing what it meant (and not thinking to just look it up online! Why?) wrote back "LOL" in an attempt to confuse him and prove that I knew abbreviations too, and then he wrote "Wuts funny?" and I paced around the guest bedroom where we kept our bulky desktop computer in a panic.

There were the hours spent chatting with friends I had already seen at school that day and would see again the next, the declarations of love from a classmate who barely spoke to me in person, the thousands of times I typed the word "kewl," and the ever-changing away messages.

And then there were the chat rooms. Whether with my best friend by my side, or all alone, I'd occasionally venture into the world of strangers asking "A/S/L?"

"72/F/Alaska," my best friend and I would type together, giggling. "14/F/DC," I'd write by myself, my ears on high-alert for the sounds of my parents on the stairs. Things could go from harmless to creepy in an instant, and I'd close out the window with my heart beating fast, having gotten a glimpse into something for which I wasn't quite ready, but which I kind of wanted to know about anyway. (Friends who had accidentally made their screen names something with a dirty double meaning had their innocences battered by anonymous internet men far more often.)

And I'm not the only one who was feeling nostalgic about the news:

Each AIM chat lured a generation deeper into the internet, and all the connection (good and bad) that it could offer. I may barely think about AIM now, but this announcement still hits a bittersweet note.

AIM has stuck around for 20 years, and now it has G2G. Thanks for the memories. It's truly been kewl.