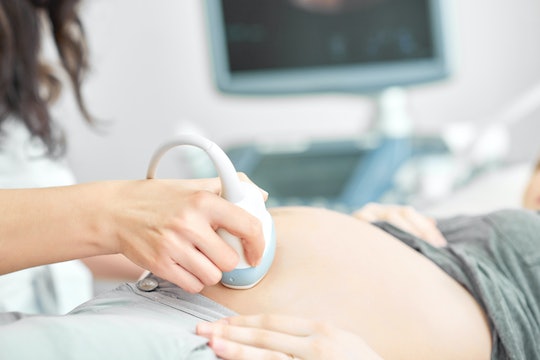 The Air You're Breathing Could Hurt Your Baby's Brain Growth, Study Finds

There's enough science to show that all pollution is bad pollution, but environmental agencies have set standards on what's deemed "acceptable." But when you're pregnant, even so-called safe levels can have a detrimental effect on you and baby. In fact, new research has shown that exposure to residential air pollution can slow down a baby's brain growth during fetal life, and affect cognitive function in the long-term.

A new study published in Biological Psychiatry found that so-called acceptable levels of air pollution may negatively impact fetal growth and brain development, and lead to cognitive impairments when the child is of school-age, according to ScienceDaily. For the study, researchers enrolled a large cohort of pregnant women in the Netherlands, and followed their children from birth until preadolescence. They also assessed the pollution levels at home during the fetal life of more than 780 children.

What they discovered in their analysis was a link between exposure to fine particles during fetal life to a thinner cortex — the outer layer of the brain — in several areas when the kids were between 6 and 10 years old. These brain changes, the study concluded, had contributed to a decline in impulse control, which is also associated with mental health and behavioral problems, ScienceDaily reported.

Lead author Monica Guxens of the Barcelona Institute for Global Health said of the findings, according to ScienceDaily, "We observed brain development effects in relationship to fine particles levels below the current EU limit. Therefore, we cannot warrant the safety of the current levels of air pollution in our cities."

The findings would also suggest that exposure to air pollution well below what is deemed safe could cause permanent disruption to a child's brain function, according to researchers. Guxen said, "Although specific individual clinical implications of these findings cannot be quantified, based on other studies, the observed cognitive delays at early ages could have significant long-term consequences such as increased risk of mental health disorders and low academic achievement, in particular due to the ubiquity of the exposure."

But this is not the only study to link a mother's exposure to air pollution to changes in their children. A study published in JAMA Pediatrics last year found that pregnant women exposed to fine particle pollution have babies who showed greater signs of cellular aging compared to moms who breathed in fresher air, according to Reuters. The findings, researchers said, suggest a possible biological cause for health problems experienced by kids who live in highly polluted areas, Reuters reported.

The Biological Psychiatry study affirms why parents-to-be need to be diligent in limiting their exposure to air pollution during pregnancy. But the truth is, it's not always easy, especially for pregnant people who live in densely populated cities like San Francisco or New York City. Constant traffic, interactions, and general physical activity in urban centers can raise the level of pollution to unacceptable levels, which means moms-to-be will breathe in unsafe air unwillingly.

Still, there are some thing you can do to stay safe during the nine months and beyond. Research from Simon Fraser University in 2018 found that having a quality air-purifier in your home can help filer out pollutants like smoke, allergens, mold, and germs to keep your air clean. You could also use natural and vegan-based household cleaners instead of chemical-based ones, as well as install carbon monoxide detectors and do routine checks for mold. And, if possible, try to stay inside as much as you can. Granted, that's not possible for everyone, but the more you can avoid spending time outdoors, the better.

But it's not only up to you to protect yourself. Government officials and lawmakers also have a hand in cutting down on air pollution. Whether or not this current administration will do anything about it, though, is doubtful.