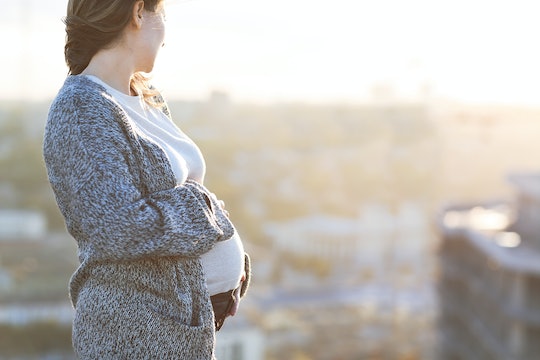 Air pollution has become an increasingly hot topic over the years, with people struggling to understand the impact it has on adults. Recently, researchers began to look into air pollution's impact on babies as well, and what they found is a little shocking. According to a new study, air pollution may be reaching the placenta, and here's what that means.

When people think of air pollution, they tend to think of what's visible, like columns of smoke from factories. However, air pollution can be invisible, too. The National Institute of Environmental Health Sciences defined air pollution as "a mixture of natural and man-made substances in the air we breathe".

Air pollution can typically be separated into two categories, according to the NIEHS: outdoor and indoor air pollution. When it comes to outdoor air pollution, the NIEHS noted that fine particles produced from burning fossil fuel, noxious gases, ground-level ozone, and tobacco smoke are all big issues.

Outdoor air pollution has been a problem for a long time. In 1990, the United States developed an updated version of the Clean Air Act. As outlined by the Environmental Protection Agency, "the Act calls for states and EPA to solve multiple air pollution problems through programs based on the latest science and technology information."

So, what are the impacts of air pollution?

A study in London focused on the impacts outdoor air pollutants have on pregnant women and their fetuses, as noted by The Independent. For the small study, researchers worked with five pregnant women living in London, who also planned to have C-section deliveries at the Royal London Hospital, according to EurekAlert. Researchers made sure that all of the women were non-smokers with uncomplicated pregnancies, as reported by EurekAlert. After the delivery, the women let researchers study their placentas, and the findings were shocking.

This study adds to past research, according to EurekAlert, in which researchers used the same method to find similar particles in people's airways. Dr. Norrice Liu, who helped present the study, explained that researchers were looking at the possibility of inhaled particles moving in the body, from the lungs to, eventually, the placenta. Dr. Liu went on to say, according to EurekAlert,

We do not know whether the particles we found could also move across into the foetus, but our evidence suggests that this is indeed possible. We also know that the particles do not need to get into the baby's body to have an adverse effect, because if they have an effect on the placenta, this will have a direct impact on the foetus.

Although the study was conducted in London, women in the United States are not immune from outdoor air pollution and its effects. For the past 19 years, the American Lung Association has provided a "State of the Air" report, to teach people about the air they breathe. The American Lung Association has found that more than four in 10 people live where pollution levels are often too dangerous to breathe. Although, the association noted that progress continues, thanks to the Clean Air Act.

Additional research similar to the London study may help to continue pushing politicians into tracking the quality of our air. After all, as this study suggests, the next generation depends on it.