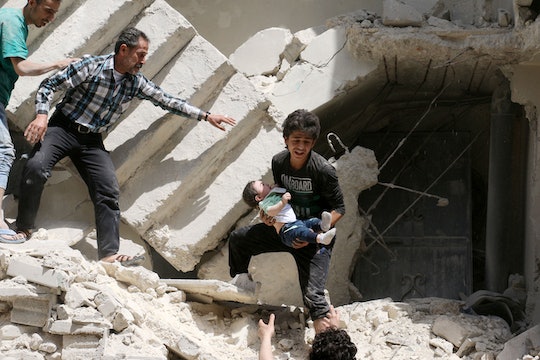 Air Strikes In Aleppo Are Putting Millions Of Children At Risk

A series of airstrikes overnight killed at least 61 people in the rebel-held city of Aleppo in Syria. Carried out by Syrian warplanes, one such strike hit a hospital killing at least 27 people including children and medical professionals. Last night’s blitz was just one of many that have hit Aleppo in the past week. The ancient city has become the center of military escalation that has disturbed the United Nations-led peace talks (currently underway in Geneva) aimed at ending the five-year-long fight between President Bashar al-Assad’s regime and rebel groups. With no sign of a ceasefire in the near future, airstrikes in Aleppo are putting millions of children at risk. According to the International Committee of the Red Cross, the escalating violence in Aleppo is putting the city at risk of becoming a humanitarian disaster.

“Wherever you are, you hear explosions of mortars, shelling and planes flying over,” Valter Gros, from the Syrian ICRC office, said in a statement released by the organization. Describing the worsening situation in Aleppo, Gros said, “There is no neighborhood of the city that hasn’t been hit. People are living on the edge. Everyone here fears for their lives and nobody knows what is coming next.”

Over the last 24 to 48 hours, Aleppo has suffered “catastrophic deterioration,” says Jan Egeland, the head of the U.N. humanitarian assistance task force in Syria. The destruction has severely impaired the vital aid networks that deliver supplies to millions of Syrians. “I could not in any way express how high the stakes are for the next hours and days,” Egeland stressed in an interview with Reuters. “No one doubts the severity of the situation.”

During the constant violence over the past week, the Al Quds field hospital in eastern Aleppo was completely razed overnight by regime-backed warplanes, killing several and depriving Syrians of lifesaving medical services. The Syrian Observatory for Human Rights reported that at least 27 people died—including at least three children, doctors, and patients—after a direct strike hit the hospital, which was maintained with help from the international charity Médecins Sans Frontières (also known as Doctors Without Borders). The MSF head of mission in Syria, Muskilda Zancada said in a statement Thursday, “MSF categorically condemns this outrageous targeting of yet another medical facility in Syria.”

“This devastating attack has destroyed a vital hospital in Aleppo, and the main referral centre for pediatric care in the area,” Zancada added. “Where is the outrage among those with the power and obligation to stop this carnage?”

A video posted by the Syrian Civil Defense—a volunteer rescue workers agency, also known as the White Helmets, that rushed to the hospital after the bombing—online showed lifeless bodies, including those of children, being pulled from the building’s rubble and put into ambulances as distraught first responders try to keep bystanders away from the scene (perhaps fearing another airstrike).

One of the doctors killed in the strike on the hospital was Mohammed Wasim Moaz, one of Aleppo’s last pediatricians, MSF reported. Dr. Moaz had worked at the hospital since 2013, according to MSF representative Aitor Zabalgogeaskoa. In an interview with the BBC, Zabalgogeasko praised the doctor’s commitment to children’s health and safety, saying,

He kept it going, was always there and always worried about the needs of the people. He was honest and very committed. He worked in conditions you cannot even begin to imagine.

It is not uncommon for bombs to fall on necessary resource facilities in Syrian cities (or, frankly, in conflict zones around world). Still, many human rights organizations denounce the practice as a war crime. ICRC spokesperson Ewan Watson told Reuters in Geneva, “It is unacceptable, any attack on hospitals is a war crime. But it is up to an investigator and it is for a court to take that decision on whether it is a war crime or not.”

The U.S. State Department condemned the Aleppo hospital bombing as “reprehensible.” “Once again we call on the regime to cease the absolutely senseless attacks, which are of course violations of the cessation of hostilities,” State Department spokesperson John Kirby said Thursday.

U.S. Secretary of State John Kerry called for Russia to exert its influence over Assad to get the president to observe the coordinated ceasefire and stop these airstrikes. “Russia has an urgent responsibility to press the regime to fulfill its commitments [...]including in particular to stop attacking civilians, medical facilities, and first responders, and to abide fully by the cessation of hostilities.”

Sources in Aleppo are blaming the hospital attack on bombers from Assad's military, or even from Russia, which has been backing Assad’s government. A point that Syrian military sources are denying. State TV quoted one military source as saying, “Such news is merely an attempt to cover up terrorist crimes which target the peaceful citizens in Aleppo.” For its part, a U.S. State Department official said there were signs the airstrike was executed solely by the Assad-backed Syrian military.

The danger of attacking medical facilities is not only the initial loss of life but the elimination of vital healthcare services for residents, especially those young children and pregnant women who need assistance the most. “So many humanitarian health workers and relief workers are being bombed, killed, maimed at the moment that the whole lifeline to millions of people is now at stake,” said Egeland. Airstrikes on medical facilities, whether carried out deliberately or coincidentally, discourage healthcare workers from embedding in a city where they are sorely needed.

An estimated 250,000 people are still living in Aleppo amidst the ongoing violence though millions of Syrians have fled the country since the Syrian civil war began ravaging the middle eastern country in 2011. The upsurge in violence over the past week has severely undermined the United Nations-led peace talks being held in Geneva.