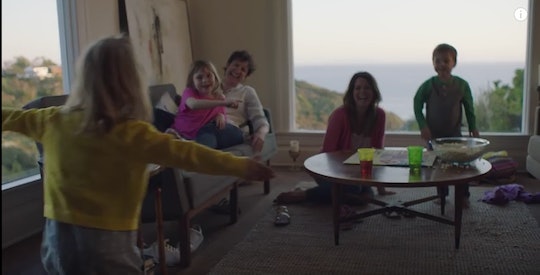 Airbnb’s Commercial With Two Moms Shows That All Families Look Different, & That Matters

Even though society is made up of all different kinds of people, you wouldn't really know it if all you had to go on was TV and movies. No matter how much progress is made for LGBTQ rights and visibility for people of color and minorities, most of the time what we still see on-screen (especially in leading roles) are white, cisgendered, heterosexual people who usually have similar-looking, thin and fit bodies. Not everyone fits into this category, of course, and there are lots of people actively trying to change that archetype, but the reality is that what we see on TV isn't usually at all very representative of what people actually live — and that makes it that much more refreshing when something comes along reminding everyone that other types of people and families are TV-worthy, too. Vacation rental site Airbnb's commercial with two moms shows that, not only do all families look different, but people deserve to see diversity on their screens.

According to Mashable, Airbnb's recent "Live There" campaign encourages viewers to skip traditional, tourist-y travel for a different kind of experience — the kind you get when you rent a house or apartment in a city and live like a local. And in its ad focusing on Los Angeles, one of the families shown living like locals is a family of five, with three kids and two moms.

In the ad, the family leaves behind their selfie sticks and skips the Hollywood sign for an Airbnb rental in the Hills, or a house in Malibu, and together they splash in the pool and run on the beach and generally have an awesome time on vacation. But where we'd normally see a catalogue-perfect hetero couple, we instead see a same-sex couple snuggling on the beach while their kids played in the sand, and then they all went for tacos and had what we're supposed to infer was the best day ever. And that's pretty freaking cool.

OK, so everyone in the Airbnb family is white, and they're still all pretty catalogue-perfect. But the best part about the ad is that you don't even necessarily realize at first that this isn't the usual mom-dad-2.5 kids-plus dog scenario that tends to be shown. It's not meant to be an ad that screams "gay people in love, everyone form an opinion!" It's just illustrating the fact that all families matter, that spending quality time with your people is important, and that, you know, you should also probably think about renting an Airbnb property while you're at it (I mean, it is an ad, after all).

The pervasiveness of the white, hetero, cisgender narrative is strong, to the point where a lot of us don't even think much about it. But we should think about it, because showing only one kind of person or family is helpful to absolutely no one. As The New York Times noted, the social media movement behind #StarringJohnCho, for example, did a great job at pointing out the absurdity of Hollywood's whiteness. When was the last time you saw a major studio rom-com who had someone other than a dreamy, buff white dude in the lead role?

LGBTQ people, women, and racially-diverse characters are all hugely underrepresented, according to GLAAD's most recent "Where We Are On TV" report for 2015. Out of 881 regular characters seen on primetime television in 2015, only 4 percent of them were identified as gay, lesbian, or bisexual. And none of them were transgender. And while the number of television characters played by people of color is increasing (yay!), the majority of those roles are going to black men as opposed to women or individuals of other ethnicities. As for people with visible disabilities, the news is even worse:

For the first time in two years, the percentage of regular characters depicted as living with a disability on broadcast programming has dropped, down to 0.9% from 1.4% reported last year. Between broadcast and cable, there is only one recurring character who is depicted as HIV-positive (Oliver on ABC's How To Get Away With Murder).

The point, it seems, is not necessarily that Airbnb deserves to be lauded for its decision to show a same-sex couple and their children in its ad (though it's great), but that we should be wondering why we are still continuing to be shown only one type of relationship (or gender, or ethnicity, or body type) over and over again.