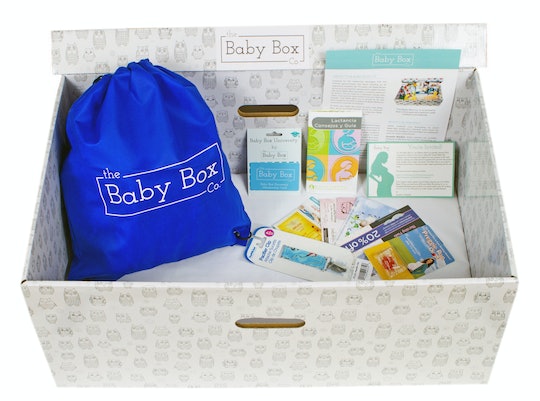 A state with high infant mortality rates hopes to tackle the problem in a new way: Alabama now has a baby box program that provides online sleep safety training for new parents, and rewards them with a free box that doubles as a crib. According to The Cut, it's the third state to implement the program; New Jersey started giving out baby boxes in January, and Ohio followed suit earlier in March. The national infant mortality rate is 5.8 deaths per 1,000 live births, according to ABC News, but Alabama's rate is 8.3 deaths per 1,000.

To receive the free box, Alabama residents must register with Baby Box University, watch a 15-minute video about sleep safety, and take a short quiz. Users can then choose to pick up the box from a local distributions center, or have it mailed to them directly. The program just launched on Wednesday, and by mid-afternoon, all 15 distributions centers were out of stock, so it looks like they're off to a successful start. The basic box contains a firm mattress, fitted sheet, and waterproof cover, and The Baby Box Co. also offers other boxes filled with clothing, diapers and other essentials for purchase, which would make a lovely gift for a women's shelter, if anyone is so inclined.

The concept of the baby box comes from Finland. In response to declining birth rates and a high infant mortality rate, the government began providing a "maternity grant" to low-income mothers in 1938, offering either a cash payout or a box of supplies. Starting in 1949, the grant was made available to all mothers. The contents change with the times each year; the BBC reported that the original box contained fabric for mothers to sew baby clothes, and ready-made outfits were introduced in the 1950s. Bottles and pacifiers were added and subsequently removed over the years, and disposable diapers were recently replaced with reusable cloth ones. The 2017 version contains everything a new parent needs, from snowsuits to condoms.

Outside of Finland, The Baby Box Co. is picking up the slack. According to the company's website, it works with "government agencies, hospitals, tribes and non-profits in 20 U.S. States" to provide free baby boxes, and has programs in 12 countries worldwide. Acknowledging that baby boxes were only one contributing factor to solving Finland's infant mortality problem, the company also provides new parents with support and education on safe sleep practices through their website. Now in Alabama, that service is available to everyone.