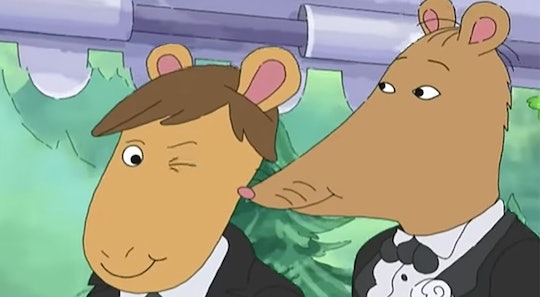 In case you missed it, beloved children's series Arthur recently released an episode featuring a same-sex marriage between schoolteacher Mr. Ratburn and his partner. Although the scene was widely lauded by parents and LGBTQ advocates alike, Alabama Public Television won't air the Arthur gay wedding episode. As for Twitter's reaction? People are so over it.

Arthur's 22nd Season (yep, it has been on the air for a hot minute) began with a transformational May 13 episode titled, "Mr. Ratburn and the Special Someone." With all of his students in attendance (Arthur, Buster, Muffy, etc.) the strict yet softhearted teacher marries a fellow aardvark named Patrick. One of Arthur's pals, Francine, who had assumed Mr. Ratburn was set to marry a woman, exclaimed during the ceremony, according to TODAY: "It's a brand-new world!"

Of course, PBS didn't air this episode for the heck of it — the pivotal moment was designed to promote LGBTQ visibility, acceptance, and to destigmatize same-sex relationships. But most importantly, the episode reflects America's diverse tapestry, where millions of LGBTQ families live and raise children.

Alabama Public Television (APT), however, must have missed this memo when it made the decision to air a rerun instead of "Mr. Ratburn and the Special Someone," according to NBC News.

Mike Mckenzie, director of programming at APT, explained his decision via email to The Birmingham News' AL.com, stating: “Parents have trusted Alabama Public Television for more than 50 years to provide children’s programs that entertain, educate and inspire... More importantly — although we strongly encourage parents to watch television with their children and talk about what they have learned afterwards — parents trust that their children can watch APT without their supervision. We also know that children who are younger than the ‘target’ audience for Arthur also watch the program."

It's important to note, however, that not all parents were on board with the decision. Mother and Alabama resident Misty Souder told AL.com that she was disappointed when the episode turned out to be a rerun, explaining that she had planned to watch it with her young daughter.

"I just want her to be aware," Souder told the news outlet. "There’s too much going on not to stand up for stuff, even if it’s Arthur. I never thought I’d be going to battle for a gay rat wedding, but here we are."

Mckenzie did not immediately respond to Romper’s request for comment regarding the decision.

APT's refusal to air Arthur's gay wedding isn't sitting well many people, especially in light of the state's new anti-choice bill, the Alabama Human Life Protection Act. The restrictive abortion legislation doesn't allow exceptions for rape or incest, and it potentially intends to punish doctors who perform abortions with life in prison, according to NBC News. And some Twitter users can't help but wonder how a gay rat wedding is more harmful to Alabama residents than this near-total abortion ban, while others are simply stunned by the hypocrisy.

One such person tweeted, "Alabama: Carrying a child of rape to term is the mother's moral obligation... Also Alabama: Don't watch the gay cartoon rat get married. We're not demons."

“How will I explain to my 12-year-old child who is being forced to give birth to her rapist’s baby that two cartoon characters are getting married?" another sarcastically commented.

Another person chimed in, "Alabama. Where an 11 year old is old enough to give birth, but too young to know what a gay person is."

Others couldn't make heads or tails of the logic behind the decision, with one person writing: "GAY MARRIAGE IS LEGAL IN ALABAMA YOU CLOWNS." (Yup, gay marriage has been legal in Alabama for years, according to Governing.)

Someone else said, "Alabama is taking away rights from women & cartoon characters."

Although many of these takes employ humor, it's clear people are fed up with Alabama's decision regarding this Arthur episode, especially in the context of the state's draconian anti-choice bill. And if you are frustrated too, don't hesitate reach out to APT directly.