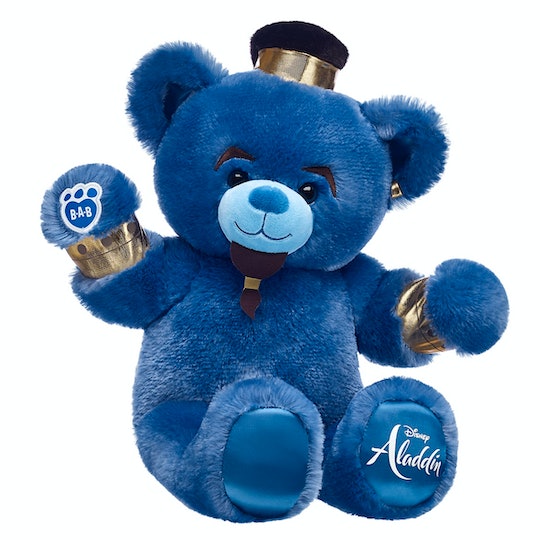 No one was more excited than me to hear that Disney was making a live action version of Aladdin. It was easily my favorite 1990s Disney film, beating out even The Lion King and Beauty and The Beast. There was just something magical and classic about the tale of Ali, Jasmine, and the Genie that captured my imagination. To celebrate this new film, there will be Aladdin-inspired Build-A-Bears available in stores and online across the country, and I am here for it.

The Aladdin-inspired bears feature everything from a dressed up Princess Jasmine bear that sings "A Whole New World" every time you hug her, to an Ali bear complete with Abu on his shoulder. The Genie bear is a personal favorite. He's so cuddly with his bright blue fur and tiny little goatee. I can practically hear him making jokes with Prince Ali (of Akhbar, obviously). The real winner on these bears is the multitudinous accessories that abound. There is so much to choose from, and kids are going to go hog wild with these new dolls in preparation for the release of the live action film on May 24.

Build-A-Bear has been consistently good with their recent forays into movie-inspired bears. My daughter has her very own Toothless dragon bear, and my son went wild when he was younger making an Ironman bear. Parents know that taking their little one to Build-A-Bear is guaranteed to bring smiles and give them a new furry friend.

Oddly enough, it's also become quite the popular field trip for schools. Both of my children have gone to the Build-A-Bear at the Staten Island Mall with their kindergarten classes and had a fantastic time. I should know, as I chaperoned 60-plus children inside a Build-A-Bear. Personal hell for me, absolute delight for them. I am telling you, you have never seen excitement until you've seen 60 children learn that they get to pick out two different accessories for their new Build-A-Bear friends. It was utter pandemonium and they absolutely adored every single minute. I cannot imagine what they would have done if the Aladdin Build-A-Bears were one of the choices.

If I'm being honest, I kind of want one of these dolls for myself. You're never too old for a Disney plush.

I am not going to lie. These bears are a spend if you buy all the accessories. Each doll with all their finery range from $50 to $60 dollars a piece. That's a lot of coin to drop on a plush. However, we all know that at Build-A-Bear, you're not just paying for the bear, you're paying for the experience. From the time you step into their store until the moment you leave, it is an activity designed to delight children of every age. It's about making wishes and giving hugs, decorating the boxes, and giving into childhood with wild abandon.

I feel slightly less worried about my pocketbook and conspicuous consumerism when I remember how devoted to charity Build-A-Bear has been over the years. They've partnered with everyone from the Make a Wish foundation to Toys for Tots, and they've delivered tens of thousands of bears to children in hospitals who don't have the opportunity to get to the store and make one for themselves.

Every child deserves the opportunity to experience the joy of making their own Build-A-Bear, and the company is trying to do just that. So if I kick a hundred or more on a few bears, I know that they're going to do good things with some of that money, and that's important to me. And now, you can spend that money on Aladdin-inspired Build-A-Bear for you and your kids.