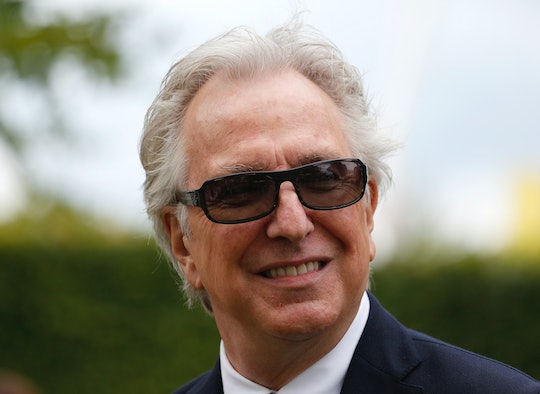 Alan Rickman Dies At 69 After Battle With Cancer — REPORT

Beloved British actor Alan Rickman died at 69 after a battle with cancer, his family confirmed Thursday, according to the Guardian. Rickman was most recently famous for his role as Professor Severus Snape in the Harry Potter films, but his legacy in film goes all the way back to his famous appearance alongside Bruce Willis in 1988's Die Hard, according to the Guardian. He also made appearances — both terrifying and not — in films such as Love Actually, Sweeney Todd: The Demon Barber of Fleet Street, Robin Hood: Prince of Thieves, Truly Madly Deeply, and Alice in Wonderland.

Rickman's family's statement was short, according to the BBC: "The actor and director Alan Rickman has died from cancer at the age of 69. He was surrounded by family and friends."

Rickman's career didn't actually begin in film, though. He was actually discovered on the stage. Rickman became popular with audiences after his role as Vicomte de Valmont in the Royal Shakespeare Company’s 1985 production of Les Liasons Dangereuses, according to the New York Daily News, and then his first big, break-out film role in front of American audiences was as the villain in Die Hard. During his decades-long career, Rickman won a number of awards, including a Golden Globe, a Primetime Emmy, a BAFTA Award, and a SAG Award, according to the New York Daily News.

Film stars around the world started responding to news of Rickman's death almost immediately. Comedian and actor Eddie Izzard tweeted a sad message this morning, according to the New York Daily News, and then shared a photo of Rickman:

I do not want my heroes to die! Alan Rickman is dead & he was another hero. Alan — thank you for being with us. We are sorry you had to go.

Stephen Fry, a longtime friend of Rickman's, also tweeted after hearing the news, according to The Atlantic:

Actor James Phelps, who played Fred Weasley the Harry Potter films, also said Rickman was “One of the nicest actors I've ever met," according to the Independent. "Thoughts and prayers with his family at this time.”

Rickman was born in Acton, which is in west London, and he attended the Royal Academy of Dramatic Art, according to the Independent. Immediately after graduating, he began acting in the Royal Shakespeare Company and later began performing in American films in the '80s. Though he often played villains, that didn't stop America from having a huge crush on him. In 2013 — when he was 66 — he ranked in seventh place on Total Film's sexiest actor list, beating out both Brad Pitt and George Clooney, according to the Telegraph.

Thankfully, fans won't stop seeing Rickman in films immediately. In a few months, he'll appear in a film called Eye In The Sky alongside Helen Mirren and Aaron Paul, according to the Telegraph. Rickman also reportedly completed Alice Through The Looking Glass, which is supposed to hit theaters later this year.

Rickman had an inspiration take on what actors and stories were meant to do for people. He reportedly said that stries can help us learn from mistakes and change the future, according to the Telegraph:

The more we’re governed by idiots and have no control over our destinies, the more we need to tell stories to each other about who we are, why we are, where we come from, and what might be possible.

And though he never won an Oscar, Rickman was never bitter. He didn't seem to see the awards he won as comments on his skill; rather, he saw them as notes on the film itself and what it may have represented that year. “Parts win prizes, not actors,” he said in 2008, according to the Guardian. He said that actors are simply tools to help convey messages to audiences around the world, according to the Guardian:

Actors are agents of change. A film, a piece of theatre, a piece of music, or a book can make a difference. It can change the world.