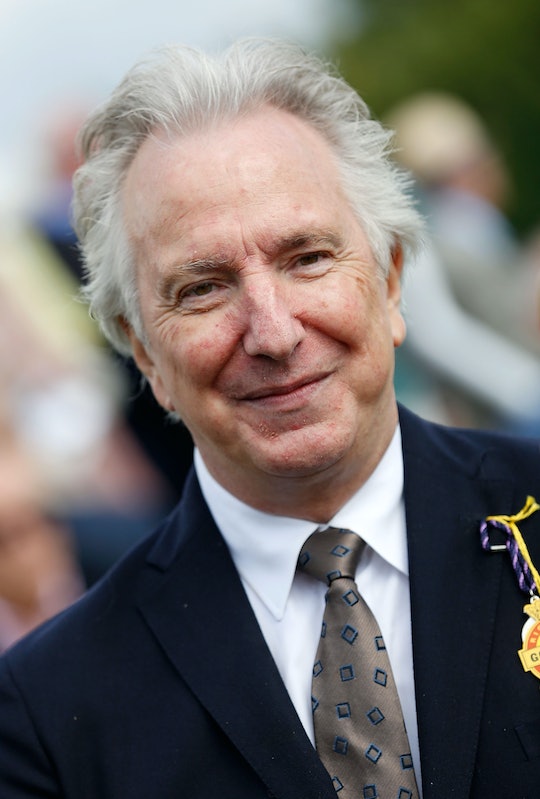 On Thursday came the sad news that 69-year-old actor Alan Rickman had passed away following a battle of cancer. On Thursday also came news of the 2016 Oscar nominees, celebrating the best of the year in Hollywood. The fact that both pieces of news came at virtually the same time seemed almost fitting — Rickman was one of the best in the business, an actor as memorable as he was charming, as talented as he was fascinating. But then came the realization that Alan Rickman has never been nominated for an Oscar. That's right — not only has he never won an Oscar, but he's never even been nominated. And this is a failing that's more criminal than any act Severus Snape ever committed.

Let's first underscore just how insane this is. Rickman, a man who won critical acclaim for dramas (The Butler), comedies (Love Actually), action (Die Hard), franchises (Harry Potter), and musicals (Sweeney Todd) has fewer nominations than Jonah Hill, Haley Joel Osment, and (as of today) Lady Gaga. All great actors and musicians, yes, but are they better than the man whose drawl and sheer skill captured generations of fans? And Rickman's snub has lasted 40 years long — so while the world was bemoaning the fact that Leonardo DiCaprio hasn't scored an Oscar win in his 20-odd years in the business, we've ignored the fact that one of the best actors in Hollywood has gone completely unnoticed.

Not, however, by fans. Including yours truly. It's odd that I was introduced to Rickman via Galaxy Quest, a silly little spoof starring Rickman Tim Allen that doesn't nearly get as much attention as it deserves. But, in it, Rickman gave a transformative performance — he was funny. He was touching. And he made audiences feel for a character that spent 90 minutes wearing a ridiculous bald cap.

But it was indicative of the actor's skill. Rickman brought that same commitment to every single film he starred in. When it came to the actor, there was no throwing in the towel. There was no autopilot. There was so much effort put into every single moment the actor spent on screen, that it was almost ridiculous. I mean, we're talking about an actor whose devotion to performance earned him instant meme status.

The Internet noticed, but why didn't the Academy? Michael Collins, Truly Madly Deeply, and, hell yes, even Galaxy Quest — all films that should have earned the actor Oscar attention. Even 20 years after Rickman should have scored his first nomination — for Die Hard, in which he gave new meaning to the words "Ho. Ho. Ho." — when Oscar chatter ignited for the actor after his role in Harry Potter And The Deathly Hallows, he still wasn't on the Academy's radar. And a posthumous award even seems unlikely at this point. Rickman's only unreleased role is a voiceover for this year's Alice Through The Looking Glass.

But it's not something that Rickman would even have us spend a second thinking about.

The actor has been asked about the snubs in the past, and has brushed them aside. As he said in 2008, “Parts win prizes, not actors." (Mic. Drop.) Though that might sound bitter, it's anything but — Rickman instead chose to appreciate his work, not long for institutions to. "A film, a piece of theatre, a piece of music, or a book can make a difference. It can change the world," he said.

And Rickman did indeed make a difference for fans. So as much as we'd want to say Accio Oscar Nomination!, it's important to remember the true honor here: The fact that Rickman left us a body of work that we, and the industry, will never, ever forget. And that's a far better prize than a little gold man, isn't it?