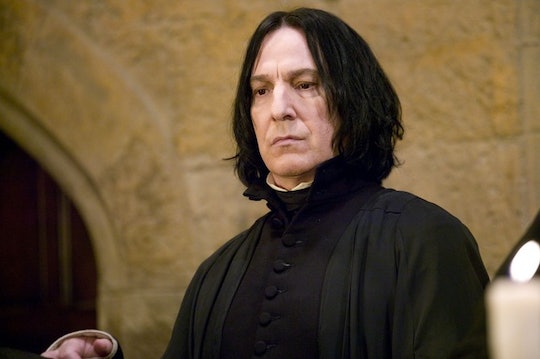 It's a sad day for Slytherins, and really, all of the wizarding world: Alan Rickman has passed away at 69 after a battle with cancer. Harry Potter fans have been through a whirlwind with Rickman via his character, Professor Severus Snape. When fans first met him, it seemed certain that he was a villain. Staring Harry down from the head table in the great hall his first night at Hogwarts, Snape appeared to embody evil itself. It still remains one of Alan Rickman's best scenes as Snape. But as Harry's journey progressed, it became clear that Snape was no one-dimensional bad guy; as it turned out, he actually cared very deeply for Harry.

Throughout the series, Rickman played Snape honorably as a complicated, flawed man who suffered from internal struggles. In real time, fans chalked those struggles up to a simple good vs. evil conflict, but the truth was surprisingly more human than that: Harry was the son of Lily Potter, who Snape loved more than anyone or anything, and James Potter, who had tormented Snape during his childhood. Every time Snape looked at Harry, he had to make a choice: love Harry, because he loved his mother, or hate him, because he was more like James than Snape could stand. And it showed. Whether he was being kind or cruel, Snape's moments with Harry were among Rickman's best scenes in the Harry Potter series: