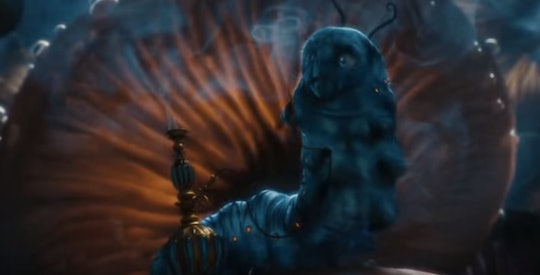 While many fans know the late Alan Rickman for his role as the villianous Hans Gruber in Die Hard or as Severus Snape in the Harry Potter films, Rickman's work didn't start — or end — there. In fact, Rickman has been acting on both the stage and big screen since the '70s. During this career, he has taken on a wide variety of rolls: He was Judge Turpin in Sweeney Todd: The Demon Barber of Fleet Street, Harry in Love Actually, and Sheriff George of Nottingham in Robin Hood: Prince of Thieves, but Rickman was also the voice behind some of the most iconic animated characters of the last century— including Marvin the martian, in The Hitchhiker's Guide to the Galaxy, the Blue Caterpillar, in Alice in Wonderland and the upcoming Alice Through the Looking Glass. Alan Rickman's greatest voice overs are just as notable as his best performances on film.

That's because Rickman's voice had a quality like no other. It was creepy enough to strike fear into the hearts of Hogwarts students, but it also had a noble edge that allowed him transform into the most royal of characters. (Seriously, I could listen to Rickman speak all day...and I mean all day.) Here are three instances where Rickman was intense, versatile, and — well — Alan Rickman.

I'll admit it: I've never seen this movie, but based on this clip I need to! It seems Rickman once played a badass, and evil, fish named Joe who sings a Lion King-esque tune (think "Be Prepared") that may give Scar a run for his money.

As The Android, Marvin, In The Hitchhiker's Guide to the Galaxy (2005)

Oh, Marvin, you poor, pensive, paranoid android. How I love you! And you know what made me love you even more: When you were voiced by the incomparable Rickman. (Swoon!)

As The Philosophical Blue Caterpillar, Alice in Wonderland (2010)

You're not Absolem. I'm Absolem. The question is who are you?

That may be, Absolem, but today the question is why: Why did the world have to loose such a respectable and talented man so soon? Luckily, Rickman's voice will star in Alice in Wonderland: Through the Looking Glass in May, so fans will be able to hear his voice a few more times.

R.I.P., Rickman. Your face, voice, and very being will be missed.