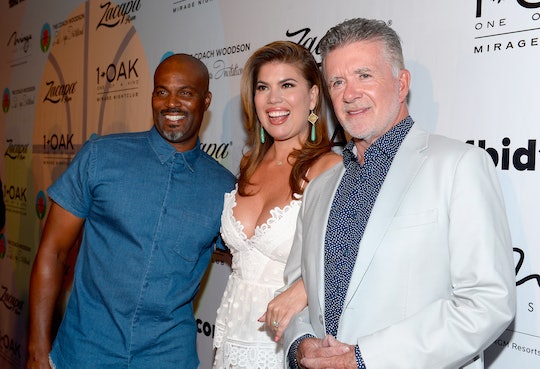 Alan Thicke Quotes That Prove Just How Much He'll Be Missed

Not content with all the other bad stuff it already threw at us, 2106 decided to take away Alan Thicke too. The actor, best known for his role on Growing Pains, passed away suddenly on Tuesday at the age of 69. Fittingly for a sitcom dad, Thicke leaves us with some wise and wonderful quotes that prove just how much he'll be missed.

According to TMZ, Thicke died of a heart attack while playing hockey with his son Carter. He also leaves behind sons Brennan and Robin (of "Blurred Lines" fame), along with his wife, Tanya. Thicke graced the small screen often, with some of his more recent appearances in roles on This Is Us, Fuller House, and How I Met Your Mother, although he has a special place in many people's hearts from his time playing the perfect sitcom father, Jason Seaver, on Growing Pains.

But the Canadian-born actor didn't just say other people's words beautifully. Thicke wrote two books about fatherhood, How Men Have Babies and How To Raise Kids Who Won't Hate You. And, as expected, he had plenty of wisdom to offer on how to be a good parent, as well as a good person.

When talking to The Huffington Post back in 2014 about his children going into show business, Thicke said,

I’d be happy if they were orthodontists because straightening teeth will be around forever and show business can be fickle, but I also tell them to follow their dreams to the last drop... just don’t be stupid about it.

And when asked about the advice he'd give to his son Robin, who was going through the dissolution of his marriage at the time, Thicke said,

My advice to Robin is listen to your heart, do what you feel. Follow your heart in love and marriage as you would in careers and you’ll be fine.

He also had advice on how parents should deal with raising children in the era of social media, saying, "Be aware of what they're exposed to and try to stay one step ahead of that."

And Thicke was quick to praise his own dad, about whom he told Canadian Business,

He instilled the work ethic in us, not only in terms of having a career and making money but also learning things that will enrich your experience and make your day more interesting. Find things that fascinate you and follow up.

In a former quote that may be particularly helpful to his grieving fans, Thicke was sanguine about the inevitability of death and how humor could help one deal with it, saying, "We are humans. There is a finite end to this life and we're all going to face it and a little silliness can help."

Just a few days prior to his death, Thicke joked to CBC Radio about receiving the Canadian Icon Award, saying, "By this point you're either an icon or a punch line."

Icon all the way, Alan.