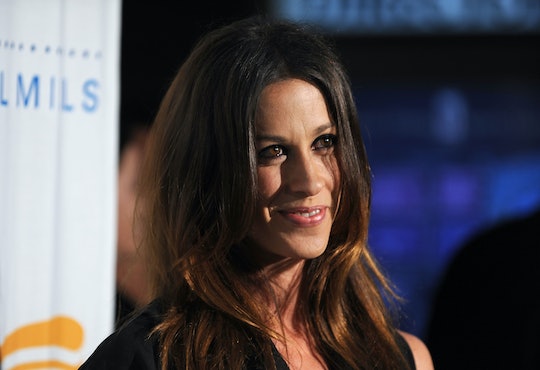 Alanis Morissette Gives Birth To Baby #3 — A Boy! — & His Name Is Truly Magical

Alanis Morissette and her husband Mario "Souleye" Treadway just expanded their family by two adorable feet, which means they're officially parents of three now (and they're officially on "zone defense" instead of man-to-man when it comes to parenting, haha). On Monday, Aug. 12, Alanis Morissette gave birth to a baby boy, just six months after announcing her pregnancy. As for the little guy's name? I think it's safe to say his name is truly magical.

In case you missed it, Morissette took to Instagram on Monday to share a black-and-white photo of her napping newborn son. And from the looks of it, her baby boy is absolute perfection. "He’s here," she captioned the post, revealing her son was born on Aug. 8. The thrilled mom also revealed her little guy's name in the caption, introducing: "Winter Mercy Morissette-Treadway" to the world. Morissette ended her heartfelt post with the hashtag: "#mywholelifeidreamedoflovingyouthree."

Can I pause here for a second and pay tribute to baby number three's stunning name? It's just so magical and unique.

Of course, fans had plenty to say about Winter Mercy's special moniker.

"A baby named Winter, born in the middle of summer. Isn’t it ironic...?" one person joked.

Someone else said: "Beautiful names as always. I named my second daughter after you."

"Beautiful name," a fan penned. "I have a daughter named Winter."

Meanwhile, proud papa Treadway shared the same photo to his Instagram, writing, "He’s here. Winter Mercy Morissette-Treadway @alanis You will forever be my heroine. thank you for your warrior strength and ability to so deeply love."

The couple also share an 8-year-old son, Ever Imre, and a 3-year-old daughter, Onyx Solace, according to Us Weekly.

The "Ironic" singer revealed her pregnancy back in March, according to Us Weekly, doing so in the most low-key, yet epic way. "So much NEWness.." she captioned a photo of herself recording music while wearing a sweater that revealed a distinct bump.

"I was basically feeling a little unusual," Morissette, 45, told Self magazine, of learning about the unexpected pregnancy. "I've been pregnant before, so I started feeling those familiar feelings of lightheadedness and just certain things, and so I asked my husband to pick up a little pee-on-the-stick (test) on the way home. And then I got my answer." This was followed by a "complete freak-out-joy-freak-out moment."

It'll be interesting to see if Morissette's description of her home birth with baby Winter compares to that of her daughter, Onyx, which was a bit intense.

“It was terrifying, but then once we heard her, and once she cried [and] I pulled her up and she started breastfeeding, I was just like, ‘Ah,’” she told People in 2017. “It gets gnarlier and gnarlier. I think the words Texas Chainsaw Massacre were used when [my midwife and doula] walked in. It’s pretty gnarly, but it’s not meant to be all clean and perfect. We are animals.”

Morissette continued, "It’s like an 18-wheeler careening through your whole body. It’s beyond pain. I have a high tolerance for pain … this trumped all."

Yikes! And yet, as someone whose epidural for my fourth delivery failed after having three pain-free births, I can absolutely confirm this narrative.

Morissette has also opened up about her history of postpartum depression, something she's being proactive after her third child. "The first time around, I didn't seek help for a year and four months," she told Self. "And I remember calling a doctor and I said, 'Does this get easier if I kind of stick it out and soldier through it?' — which had been my way of approaching almost everything in my life, just soldier though — and she said, 'No, it actually gets worse.'"

When her second baby was born, the singer again attempted to "solider through" her PPD, except that time, it was only four months before she reached out to get the help she needed. "This time, I'm not even waiting four minutes," she told Self.

Fingers crossed that Alanis Morissette's transition from two to three children is relatively smooth. But if PPD does rear its ugly head again, hopefully she doesn't wait to seek help. In the meantime, congrats to Alanis Morissette and Souleye on their sweet baby boy, Winter Mercy.