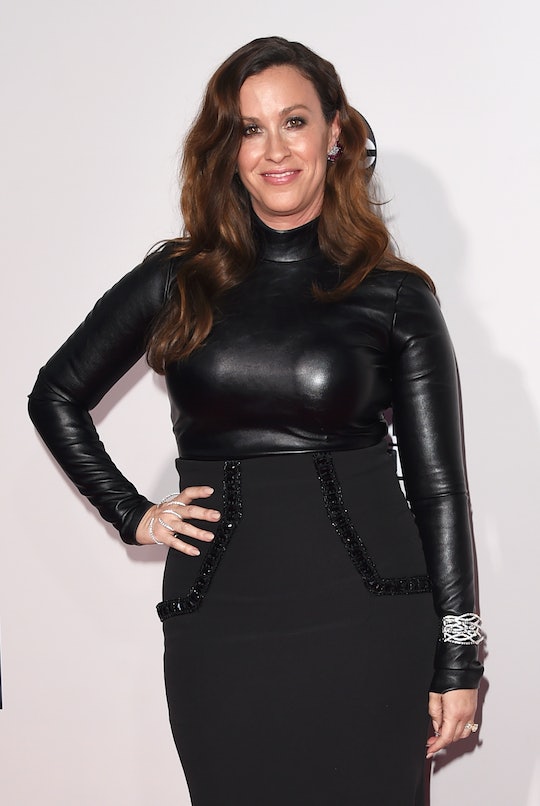 Unless you've experienced it for yourself, it's difficult to imagine what postpartum depression and/or anxiety is like. But for new parents in the thick of this diagnosis, life can seem extremely overwhelming as well as isolating. Someone who knows this all too well is Alanis Morissette, who talked about postpartum depression and anxiety in a candid blog post shared Monday. Morissette, who has experienced this condition twice before, revealed she's struggling with it again after giving birth in August.

As a refresher, the "Ironic" singer welcomed her third child, a baby boy named Winter, with husband Mario "Souleye" Treadway in mid-August, Us Weekly reported. The couple also have a son, Ever, 8, and a daughter, Onyx, 2.

Now that baby Winter is creeping up on 2 months old, the mom-of- three has offered an update on how she's been coping. And unfortunately, it appears her postpartum depression and anxiety have returned once again.

Morissette took to her personal website on Monday, Oct. 7 to share about her latest experience with PPD and PPA, noting she wasn't sure if she'd ever be back in this place again. “I wasn’t sure if i would have post partum depression/anxiety this time around. or, as i like to call it: post partum activity. or, also: post partum tar-drenched trenches. there are so many tentacles to this experience,” she started her lengthy post.

In a stream-of-consciousness type of writing style, the singer continued: "Recovery from childbirth (as beautiful and intense as mine was at home, dream birth.), integrating new angel baby with older angel babies. Marriage. all kinds of PTSD triggers. overstimulation. this body. attempting to crawl back to some semi-recognizable configuration."

Yep. As someone who has gone through PPD/PPA, this sounds about right to me. And because this isn't Morissette's first rodeo either, she seems optimistic that her life will soon be back on track.

“I saw how things got richer after i came through it the last two times. i have my eye on that prize again … even as i drag my *ss through the molasses," she wrote. "There is so much more support this time."

For Morissette, the support she's referring to has included friends, food, sun, "bio-identical hormones," and SSRIs ( a category of anti-depressants), all of which she made sure were available to her prior to giving birth.

But despite all of these precautions, the singer is finding it difficult to stay above water. “PPD is still a sneaky monkey with a machete — working its way through my psyche and body and days and thoughts and bloodwork levels,” she said. "... I have stopped, this time, in the middle of it. lord knows i don’t want to miss a thing … with my kids."

This isn't the first time Morissette has opened up about her struggles with postpartum depression. That's because she suffered from PPD after her first two children were born. "The first time around, I didn't seek help for a year and four months," she told Self in June. "And I remember calling a doctor and I said, 'Does this get easier if I kind of stick it out and soldier through it?' — which had been my way of approaching almost everything in my life, just soldier though — and she said, 'No, it actually gets worse.'"

The singer once again attempted to "solider through" PPD after her second baby was born, as she shared with Self. After four months, however, she ended up reaching out for help once again.

Even though Alanis Morissette is dealing with PPD and PPA for a third time — which is obviously tough — it's encouraging to see that she is already treating it instead of hoping the symptoms will go away on their own. I also appreciate how she's sharing her experience as it's happening because I have no doubt Morissette's words are reassuring to other new moms who might be struggling, too.