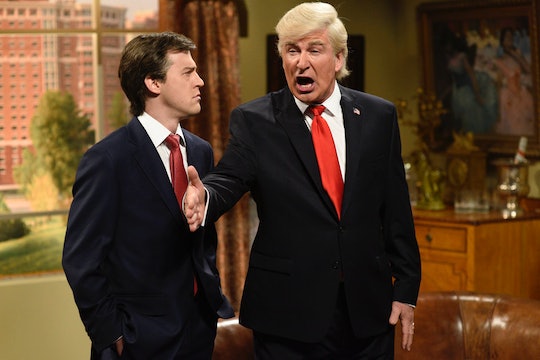 Trump Is Haunted By Ghosts On 'SNL'

Since Donald Trump first announced that he was running for President of the United States, Saturday Night Live has been having a field day with mocking him. For the past year the show almost always starts with a skit about what he might be doing now. On the December 2 episode, hosted by Soairse Ronan, Alec Baldwin was visited by ghosts of Trump's past on the SNL cold open, with various members of his administration showing up to spook him. And I have to say, Trump makes a pretty convincing version of Ebenezer Scrooge.

Everyone is probably pretty familiar with the classic story of A Christmas Carol, in which a hard-hearted miser is visited by several ghosts on Christmas Eve, that together teach him the meaning of Christmas. In the Saturday Night Live version, Baldwin's Trump is visited by Mike Flynn, the "ghost of witness flipped," followed by several terrifying (to Trump) apparitions, including the likes of Vladimir Putin and — dun, dun, dun Hilary Clinton as the Ghost of Christmas Future. It was one of the funniest Trump skits I've seen on Saturday Night Live in a while, and not just because A Christmas Carol is a personal holiday favorite of mine. And it turns out that I'm not the only one who loved it either.

The Michael Flynn impersonation was an obvious reference for anyone who's paid any attention to the news in the past week. Flynn is Trump's former National Security Advisor, and on December 1, he pleaded guilty to lying to the FBI about his conversations with the Russian ambassador almost a year previously. Very little is known yet about what exactly this means for the Trump administration, but most experts agree that it does not look good. Luckily, America has Saturday Night Live to bring some much-needed levity to these genuinely terrifying times.

The jokes didn't pull any punches from the get-go, with Kate McKinnon reprising her beloved Kellyanne Conway impression. "I got so drunk I told the truth," she vocal-fryed. Baldwin's Trump then showed Kellyanne all the hilarious Muslim videos he'd been retweeting before Mikey Day as Flynn, draped in chains, appeared in a cloud of smoke. Trump thinks he knows why Flynn has come for him, and rails off a concise list of some of the worst of Trump's offences. "It's the Muslim stuff right? It's for calling Mexicans rapists? The Roy Moore stuff? Draft dodging? The birther stuff? Pocahontas? The Central Park Five? No wait! Making fun of the handicapped reporter like this?" But Flynn is just there to beg Trump to come clean for the good of the country. And Twitter loved it.

The first ghost to visit Trump was Alex Moffat as Billy Bush, here to remind Trump (and all of us) that Bush got fired simply "for listening to you," and that if he worked for NBC he'd be fired by now. Though not a ghost, Cecily Strong did an incredible Melania impression, very excited about her Christmas decorations of dead leaves and mysterious shadows.

A shirtless Beck Bennet then showed up as Vladimir Putin, telling Trump "I see and hear everything you do," and asking him to "Chill out brosky." Of course the kicker was saved for the third and final ghost, who appeared wearing a black hood, who Trump was initially relieved to see, believing it to be Steve Bannon (get it?). But no, it was McKinnon again, this time as Hillary Clinton, the Ghost of Christmas Future. "Merry Christmas!" she cried with her iconic laugh. She told Trump he's given her the greatest Christmas gift of all, "sexual gratification in the form of your slow demise," before disappearing amidst a chant of "lock him up!" I may regret saying this, but I don't believe I've ever agreed with McKinnon (as Hillary Clinton) more.