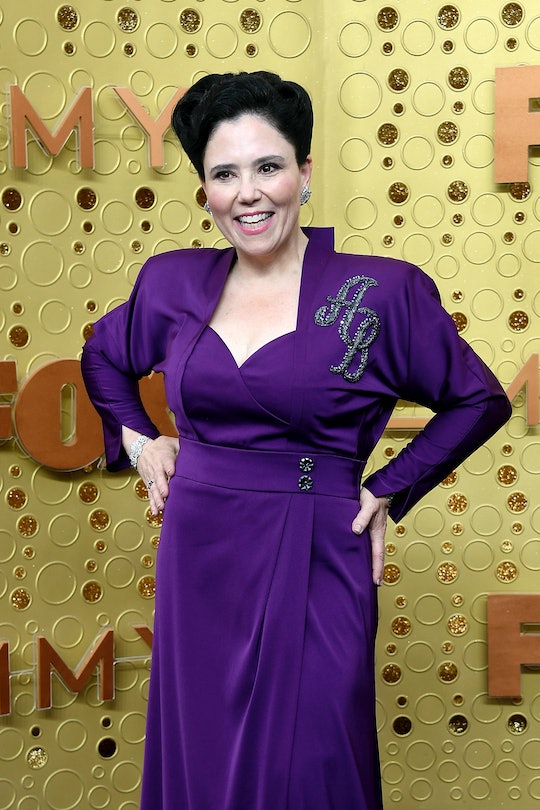 Alex Borstein's Emmys Acceptance Speech Was Feminism At Its Finest

If you're a fan of The Marvelous Mrs. Maisel and you tuned into the Emmy Awards on Sunday night, then you were probably pumped about the recipients of the first two awards. The Best Supporting Actress in a Comedy Series (for the second year running) was none other than Susie. And Alex Borstein's Emmys acceptance speech was, of course, truly moving and powerful, as she implored women to "step out of line."

Borstein broke the ice in her speech — in her signature style — with a little hilarious TMI. "I know a lot of people were upset last year because I wasn't wearing a bra. So I want to apologize because tonight I'm not wearing any underwear," she confessed. "So you're going to want to just throw that chair out or clean it pretty good."

But then, the talented actress got incredibly serious. "I want to dedicate this to the strength of a woman, to Amy Sherman-Palladino, to every woman on the Maisel cast and crew, to my mother ... to my grandmother. They are immigrants. They are Holocaust survivors," Bornstein said in rapid succession while holding her award up. "My grandmother turned to a guard — she was in a line to be shot into a pit — and she said, 'What happens if I step out of line?' and he said, 'I don't have the heart to shoot you, but somebody will," Bornstein continued:

Unsurprisingly, it was that very last bit that resonated with viewers at home — and moved Twitter users to tears.

Another Twitter user declared, "I have a feeling that Alex Borstein’s 'step out of line ladies' speech will be a new rallying call."

Yet another person summed up her speech perfectly, writing, "Alex Bornstein used her Emmy win to show her ability to go from crass humor to deeply moving material, dedicating her second win to her grandmother who almost died during the Holocaust."

Bornstein's acceptance speech at the 2018 Emmy Awards was also memorable. Not only did she drop an F-bomb when her name was announced, but she proceeded to take off her jacket and then shimmy before walking up to the stage. "I went without the bra," she declared once she reached the microphone, before making a PSA about public bathrooms. "Ladies, when you use a public restroom, sit down. If you sit, we can all sit. Stop peeing on the seat." Of course, Bornstein also thanked Amy Sherman-Palladino, the cast and crew of The Marvelous Mrs. Maisel, as well as her family — all in a touching, one-breathed rattling off of gratitude.

In case you were wondering, Season 3 of Marvelous Mrs. Maisel will hit Amazon Prime on Dec. 6. Will Alex Borstein go three for three seasons — and once again make an epic acceptance speech at the 2020 Emmys? I guess we'll just have to wait and see!