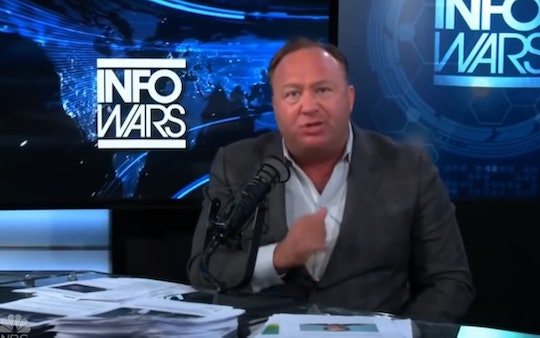 Alex Jones Is Suing The Parents Of A Child Killed In Sandy Hook For $100,000

Alex Jones, who for years peddled the outrageous claim that the 2012 shooting that killed six adults and 20 first graders was a hoax, and that the parents of the victims were actors who participated in an elaborate ruse in order to advance gun control legislation. And now Alex Jones is suing Sandy Hook parents who lost a child in the deadly 2012 shooting, according to The Daily Beast. The Infowars host is reportedly seeking $100,000 in court costs from the family suing him for defamation, because there is, apparently, no rock bottom anymore.

As a result of Jones's conspiracy theories, never-ending harassment and death threats from Jones's fans has forced 6-year-old Noah Pozner's parents, Veronique De La Rosa and Leonard Pozner, to move seven times in the last five years. "I would love to go see my son's grave, and I don't get to do that," De La Rosa told The New York Times. She now lives hundreds of miles away, in a high security community.

But Jones is playing the victim, according to The New York Times, and arguing that his legal troubles are the result of people trying to "silence" him. De La Rosa and Pozner are seeking a defamation ruling against Jones and his website, Infowars, for spreading false claims about the shooting. Two similar cases, one filed in Connecticut another in Texas, are pending. Jones also has hearing scheduled in the same Austin courthouse on Thursday for yet another defamation case filed by Marcel Fontaine, who he falsely identified on Infowars as the gunman in the Parkland, Florida, school shooting. Fontaine has never even been to Florida.

In January 2015, Jones called Sandy Hook, one of the deadliest mass shootings in U.S. history, "synthetic, completely fake, with actors, in my view, manufactured," according to Reuters. He's also referred to the shooting as "a giant hoax" and claimed that "no one died," New York magazine reported. "Conspiracy theorists erase the human aspect of history," Pozner told the magazine. "My child — who lived, who was a real person — is basically going to be erased." Jones is trying to have the both cases dismissed under the Texas Citizens Participation Act, which protects free speech, and is seeking more than $100,000 in court costs from De La Rosa and Pozner.

In an affidavit, Pozner stated that in 2015, Jones "showed his audience my personal information and maps to addresses associated with my family," according to the Times. The following year, Infowars follower Lucy Richards was arrested for repeatedly threatening Pozner's life and sentenced to five months in federal prison, followed by five months of house arrest and three years' probation. The conditions of her release bar her from visiting Infowars and other conspiracy theory websites.

Accusing grieving families of faking their children's deaths for political reasons is only one of the myriad outrageous falsehoods Jones has promoted. According to the Southern Poverty Law Center, which labeled Jones "the most prolific conspiracy theorist in contemporary America," he also claims that the September 11 attacks, the Boston Marathon bombing, and the Oklahoma City bombing were staged by the government, as well as several more high-profile mass shootings. He was the originator of the "Pizzagate" conspiracy theory that drove a man to open fire in a Washington, D.C. pizzeria in 2016, according to the Washington Post, and he counts the man who shot former Arizona Rep. Gabrielle Giffords among his fans. Oh, and he's also a moon landing denier, according to the Daily Beast, because of course he is.

Jones has, on occasion, been forced to walk back some of his claims. He eventually issued a retraction of the Pizzagate story, according to the Los Angeles Times, and last year, facing another defamation suit, he apologized for claiming that yogurt manufacturer Chobani was "importing migrant rapists." Last week, Facebook removed his personal page for 30 days (although the Infowars page remains), and YouTube took down four of his videos and banned him from live streaming for 90 days. However, his channel still has over 2.4 million subscribers, more than double the number that he had before then-candidate Donald Trump appeared on his show in 2015 and praised his "amazing" reputation. Even if the judge rules against him, he won't be silenced, and unfortunately, people are still listening.