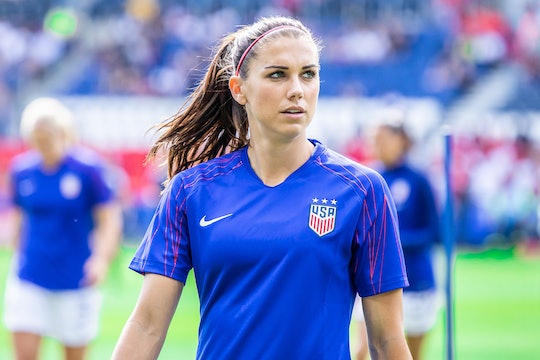 Olympic gold medalist, World Cup champion, and all around soccer legend Alex Morgan is adjusting to being a working mom. "It's been amazing," she tells Romper of motherhood, adding that it’s also, of course, been "a huge adjustment."

Five months after giving birth to her daughter, Charlie Elena Carrasco, with husband, Servando Carrasco, Morgan is back on the field — this time with Tottenham Hotspur of the English FA Women's Super League. And with a baby in tow, according to Morgan, life "couldn't be more different" these days.

Some of the challenges Morgan has faced will sound familiar to fellow working moms, even if you aren’t a professional soccer player. "The first week it was quite difficult — just being away from Charlie for six, seven, eight hours at a time," Morgan says. "I wasn't used to being away from her for that long."

Figuring out a breastfeeding schedule with Charlie was also complicated. "Not being able to nurse her throughout the day was really difficult," Morgan says. "I needed time to pump to be able to provide enough milk for her."

"My favorite time of day is when I get to come home to see Charlie, after being at training or whatnot."

On top of adjusting to life as a working mom, Morgan was also getting back into training postpartum, moving to a new country, and working with a brand new team. "There were so many components to it," Morgan says. "I'm in my third week now and I feel like I'm starting to get the hang of it a little bit more… it's always difficult to leave Charlie for a long day."

Thankfully, Morgan has her mother-in-law close by to help while Carrasco, also a professional soccer player, finishes his own season with Fort Lauderdale CF in Miami, Florida. "It's been quite difficult, but I think that we're managing pretty well," Morgan adds.

One of the newest things on Morgan's plate as a working mom? A partnership with GoGo SqueeZ to help make youth sports fun and accessible for all kids. "There's a lot of things that sports provide that you can't get elsewhere," says Morgan, who began playing organized soccer at 14. "Then there's what I remember as a kid, which was becoming friends with all my teammates and sharing snacks at halftime or during and after training and just being able to have a good time while playing sports."

Despite life skills kids will learn, like teamwork, camaraderie, and leadership, as well as lifelong memories playing sports can give children, participation in youth team sports dropped 16% between 2008 and 2018, according to The Aspen Institute's 2019 State of Play report. And while participation was down across the board, The Aspen Institute found lower-income kids faced increasing participation barriers and were less likely to play sports on a regular basis.

Unfortunately, the ongoing coronavirus pandemic has only compounded the problem by forcing leagues to cancel entire seasons as kids are quarantining at home to mitigate public health risks. But experts fear a number of youth sport clubs may not be able to weather the pause on play, and subsequently funding, COVID-19 has caused. United Soccer Coaches CEO Lynn Berling-Manuel told The Wall Street Journal an estimated 25 to 30% of U.S. youth soccer leagues may be forced to shut down permanently before kids are safely able to return to regular play.

To help keep youth sports fun and accessible, Morgan has teamed up with GoGo SqueeZ to give one lucky fan the ultimate experience of kicking a soccer ball around with her at a USWNT practice before catching their next match from VIP seats and then jetting off to Japan. Entry into the contest requires at least one donation to Laureus Sport For Good USA, a non-profit organization committed to investing in programs that improve youths' lives through sport.

While Morgan ideally wants to see all kids having fun playing sports, there's one kid she's particularly hopeful to see on the field one day: her own.

"I always want to encourage her to do what she wants to do. I'm never going to push her in a certain direction," Morgan tells Romper of daughter Charlie's potential future in sports. "I think that just goes back to me having such fond memories of playing so many sports as a kid and the excitement around it and the amount of fun I did have... I was able to play all different sports, not just soccer, and I was given the accessibility to do so and I think within that kids flourish."